The Tir na nOg ladies senior footballers put in an impressive hour of football as they brushed aside the challenge of the Boston Shamrocks. With superior fitness and an impressive display of passing, Tir na nOg controlled the game from start to finish. A first half hat trick from Catriona Traynor put the in the driver’s seat. The Shamrocks tried hard, but struggled to compete as the game was really as good as over by half time. 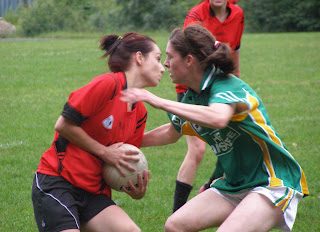 Tir na nOg opened with a goal from Catriona Traynor, which was answered by the Shamrocks with two points, Jillian McGrath and Emma Harris the scorers. Tir na nOg then took off and left their opponents in the dust. Three points on the trot from the impressive Amanda Brosnan, who plays her football back home with Dr. Crokes, followed by a second Traynor goal put some daylight between the sides. When the corner forward completed her hat trick, all in the first 20 minutes, the game was over as a competition. All that was left to do was admire the Tir na nOg display and wonder whether the Shamrocks can improve enough by the end of August to catch them, or even Roscommon. Stranger things have happened on the ladies front over the years. In any case, Tir na nOg continued to put the points over the bar. The Shamrocks cause was not helped with the loss of Kathleen Rohan to an injury. 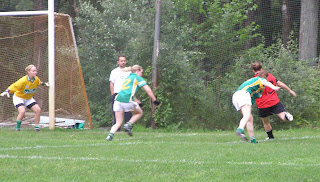 Catriona Traynor bears down on goal
Traynor, Brosnan, and Tyrone native, Emma Conlon, impressed for Tir na nOg and each brought something different to the table. Brosnan’s strength and determination made her hard for the Shamrocks to contain, Traynor’s scoring prowess makes her a huge asset, while much of Tir na nOg’s play was through Conlon in the middle of the field who showed some great passing ability. The second half continued as the first did. Arlene Maguire, Emma Conolon, and Claire Hehir also got their share of the feast of points on offer for the ravenous Tir na nOg forwards. The Shamrocks mounted several attacks, and had their shooting been better would have softened the look on the scoreboard, not to mention that the Tir na nOg back line formed a solid barrier for the Shamrocks to surmount. Jennifer Maginnis netted a consolation goal late in the second half for the Shamrocks, but at on the day, there was no way for them to contain Tir na nOg. It might be too early to be crowning champions, but it’s hard to see how Tir na nOg will be beaten unless some serious help comes their opponents way.