Wolfe Tones gained some measure of revenge for last week’s defeat of the senior team by beating McAnespies in their Junior A encounter on Sunday morning. Following a close first half, Wolfe Tones stepped up in the second half to separate themselves from a wasteful McAnespies side, and in spite of being a man down for the second 30 minutes, played with great heart in defence and made the most of their chances up front. 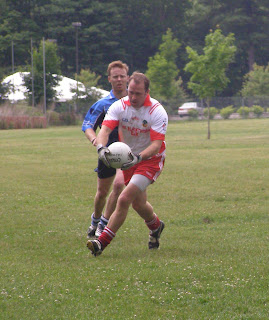 Following overnight and early morning rain, conditions were greasy underfoot, and the ball at times squirted out of hands like a bar of soap. The Tones got off to a great start with a Danny Munnelly goal in the opening minutes. Nigel Regan responded with a point for McAnespies. The Tones extended their lead with points from Michael O’Brien and Marty McGeough. O’Brien played a stellar 60 minutes for the Tones at wing back, and along with his fellow defenders made life hard for the McAnespies forwards. McAnespies came back with a goal from Steven McGettigan. McGettigan went for the give and go, but dropped the return pass and did well to slide and toe poke the ball past Wayne Murphy in goal for the Tones. McAnespies built on the goal and played their best football of the game for the rest of the half. Eoin McCusker pointed to level matters, and soon afterwards put McAnespies into the lead going into half time with another point. But for a bizarre goalmouth moment, the half-time lead would have belonged to the Tones. Following a great run by Gary Sears the ball ended up in the hands of Sean Brosnan who only had to slot the ball into the empty net from close range. Brosnan did what would have been enough to finish under normal conditions, but as the Tones began to celebrate the goal, the ball stuck in the goalmouth mud and failed to cross the line. McAnepsies cleared the danger. 1-2 to 1-3 at half time in McAnespies favour. 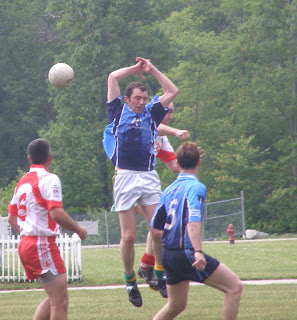 The Tones started the second half a man down. Danny Munnelly was unable to continue due to a shoulder injury and a replacement was not available. The Tones bore down however, and while McAnespies missed several chances to score, the Tones defended extremely well and played the ball well into the forward line to the point where it seemed the sides were even in terms of personnel. Gary Sears was instrumental in the Tones attack, and O’Brien and James Foley anchored the backs. Alo McGeough came up trumps for the Tones in the middle of the field as they beat the odds to secure the win. Adrian Sheehan set out the stall right after the restart with a point from corner back to get the ball rolling, and Sears goaled soon afterwards to put the Tones a goal to the good. McAnespies were guilty of some slack passing out of defence and turned possession over several times. A goal almost came as a result on one occasion, but Ray Brady saved well in goal to save from Marty McGeough.

Each side generated good chances as the half wore on. McAnespies pointed four times to two for the Tones in the following period and looked like they were getting on top and that the man advantage would eventually count. Points came from Paddy McCusker, and his namesake, Eoin, as well as Nigel Regan and Shane Lynn. Alo McGeough kept the Tones noses in front with two points, and the Tones then switched up a gear and finished the stronger of the two sides. After Shane O’Brien and Cronan Dempsey traded scores, Denis Newman and Marty McGeough restored the Tones advantage to a goal, and McAnespies started dropping balls into the box looking for the equalizing goal. Marty McGeough pointed a free in injury time to put any notions of a draw to bed. A great win for the Tones, while McAnespies will be disappointed with the outcome of the game.