Tipperary prevailed in a very entertaining opening game of the senior hurling championship. With scoring aces Pat Howard and Barry McFall in the ranks, Tipp proved to have the edge in a close game where the lead changed hands numerous times. It was a Darragh Kealy goal in the last 5 minutes that sealed the game for Tipp. 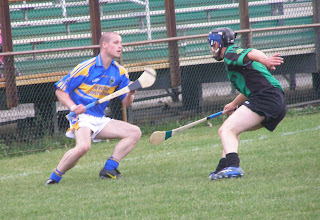 Tipp got off to a great start as Pat Howard converted a penalty, and that propelled the Premier County into a 1-2 to 0-4 lead. Barry McFall impressed with his early touches and the Antrim man put a couple of points over early. With Tipp ahead by a goal Frank Keenan put a point over from the wing for Tom’s, which was answered by Cronan Dempsey with as equally an impressive score. As the game flowed up and down the field, James Moore buried the ball for Tom’s just before half time to give the green and black a 2-point lead to protect for the next 30 minutes. 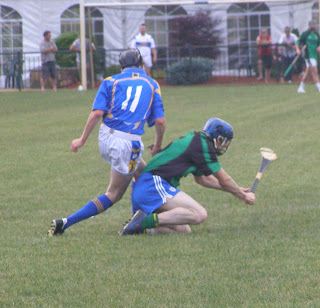 Tipp took control of the game in the second half. Pat Howard moved into corner forward and he and McFall accounted for eight of Tipp’s scores between them. After Darryl Daly extended Tom’s lead to three points, Howard and McFall (2) brought the sides to parity. Again Tom’s got their noses ahead through Frank Keenan points, but Mark Jordan and McFall pointed three times between them to put Tipp one to the good. As the sides vied for the advantage, Michael Moore pulled on a loose ball to send Tom’s ahead once again with 15minutes to go as the game ebbed and flowed. Again Tipp came back, this time the scores came from Pat Howard (2) and Andrew McRedmond. Frank Keenan brought Tom’s level again, but in the final 10 minutes Tipp would not be denied. Howard pointed twice, and the second would have been a goal had it not been for a fine save from David Hession who tipped the rasping shot over the bar. With Tipp three points to the good, and the way the game was going one almost expected a Tom’s goal to level matters. A goal came alright, but it was in the Tipp column. Darragh Kealy finished well from 14 yards to seal the deal. Trevor Kelly goaled late for Tom’s to narrow the gap, but time was called almost immediately afterwards. A good win for Tipp, but with a little help Tom’s could be a force this year.