The scoreboard in Canton still reflected Mayo’s heavy defeat to Donegal as last weekend ended on a bad note for the westerners. They picked themselves up again to face a Christopher’s side that was 2 for 2. The game turned out to be a tremendous affair where the result was in doubt until the very last kick. Mayo looked to be cruising after the first half, but Christopher’s showed some great commitment to come storming back and hold on at the end for the win. In a small bit of irony, two Crossmolina natives played a heavy part in Mayo’s downfall. 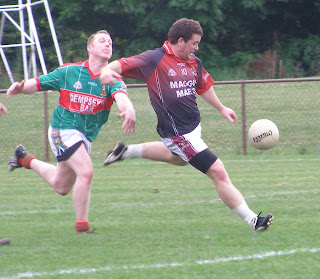 
Christopher’s started out looking strong and for the first five minutes enjoyed most of the possession. Brian McNally opened the scoring with an impressive point. Mayo struck with a goal after 5 minutes and then proceeded to settle down and played some lovely passing football. Ian O’Dowd netted from close range. With the Mayo players running in support of each other, another goal and three points followed. It could have been more; Ryan Graber in the Christopher’s goal was called upon twice to make point blank saves, and Mayo missed a couple of very point-able chances. The best Mayo point came from Patrick McHale, the midfielder finished off a lovely passing move that was a hallmark of Mayo’s first half display. Mayo’s second goal came courtesy of a hesitant pass out of the Christopher’s defence, and Pat Walsh capitalized for maximum punishment. Christopher’s brought themselves back within touching distance towards the end of the half and popped three points over without reply. Sean Kelly was the driving force at center forward. The Crossmolina man pointed twice and McNally once to make to 0-6 to 2-4 in Mayo’s favour at the break. 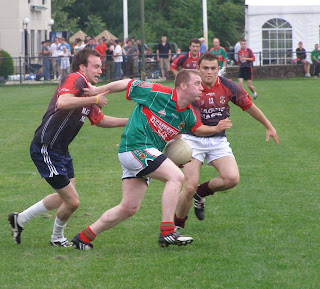 Jarvey Toner tries to evade the attentions of Ian O'Dowd


Christopher’s made some half time changes. Mark O’Sullivan was introduced to corner forward – a change that paid hefty dividends. After Mayo extended their lead with the first two scores of the second half, courtesy of Barry O’Donovan and Pat Walsh, Christopher’s back line dug in. Showing more commitment in the tackle, Christopher’s provided little room for the Mayo forwards to operate. Points came from Ian Dowling, Kelly, and Brian McNally. Mayo led by a goal entering the last 15 minutes. Things were all going Christopher’s way as they won most of the midfield exchanges and applied a lot of pressure on the Mayo back line. Dowling showed a keen left foot to point, and shortly afterwards Christopher’s took the lead with a well worked goal. Substitute O’ Sullivan showed great experience in making the extra pass to find Brian Lonergan alone in front of goal and Lonergan netted. Dowling again stroked the ball over with the left and Mayo looked to be on the ropes.

Corner back Martin Wynne tried to provide a spark to re-ignite the Mayo challenge. A give and go following a run the length of the field resulted in a goal that put Mayo a point to the good, but it was Christopher’s who got themselves fired up following the score. Dowling, the other Crossmolina man in the Christopher’s forward line, leveled the scores with another superb point, and then Christopher’s struck with a second goal, this time from O’Sullivan himself. The former Cork county player was fed by Dowling in front of goal, sidestepped his man and slotted home. Dowling followed with another point and Mayo’s goose looked cooked. The westerners lifted themselves and kept it exciting until the very last kick. The Connaught men came within two points as Barry O’Donovan pointed twice from frees, but Christopher’s weathered the late storm to maintain their 100% record.