Cork won their first senior championship game in two years at the expense of a Fr. Tom Burke’s side that could not seem to match Cork’s desire when it came down to it. It was not a day for pretty stuff, and Cork did not try for elegance as much as the direct approach. Tom’s took a 4 point lead into the break, but two Cork goals, one a brilliant strike and the other a fortunate break, took the initiative away from Tom’s in the second period. In the end it was the rebels who persevered to the bitter end of a hard fought game to claim the reward of two championship points. 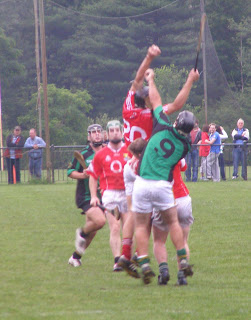 Cork and Tom's battled hard on the messy surface
The first half was an evenly contested affair. The slimmest of margins separated the sides until Fran Keenan drilled a 21-yard free into the back of the net on the stroke of half time to put Tom’s four points to the good at the break. Brendan Butler opened the scoring for Cork with a point. Butler proved to be a lynchpin for Cork at center forward, and with his first instinct to run, it proved to be an asset for the Corkonians. On a better day the early strike might have been more effective, but on several occasions Butler’s strength carried him through the Tom’s defence. The sides were content to trade scores in the opening quarter, John Cuddy and Fran Keenan pointed for Tom’s, while Johnny Fitzgerald and Butler did likewise for Cork. Tom’s started to win most of the possession in the middle of the field. Trevor Kelly was hitting the corners, and eventually Tom’s strung some scores together. Kelly, Cahir Healy, who just came off a tough football game with Donegal, and Keenan put Tom’s two to the good with three unanswered points. All the while Cork wasted several chances for scores and one wondered whether it would cost the rebels in the end. After Johnny Fitzgerald reduced the deficit to a point, Keenan struck with the goal and Tom’s were looking good. 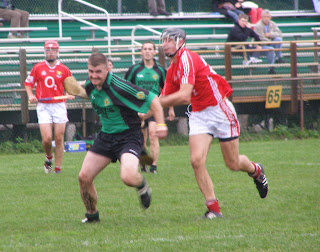 Trevor Kelly shakes the tackle and sets up Fran Keenan's 21-yard free late in the first half.
John Cuddy put Tom’s five points to the good less than a minute after the restart, and it looked like all that would be required from Tom’s was to keep ticking over and avoid making any costly errors. Cork, however, had other ideas and went on a ten points to one scoring spree in the next 20 minutes. Goals from Brian O’Loughlin and a fortunate one from a long range Mike Allen free stunned Tom’s. O’ Loughlin finished off a trademark run from Butler with a first time strike into the corner and Cork spirits rose. Allen, who had just pointed from distance, struck another long ranger. The ball dropped into a crowded box and found it’s way over the line. Cork were now two points to the good and sensed that the day just might be theirs.

Tom’s went from likely winners to having to raise their game a few levels to save the points. It got worse as for Tom’s as a rampant Cork took advantage of their reeling opponents and pointed three times without reply to open a five point lead. Cork had to make some goalmouth clearances as Tom’s grew ever more desperate for a goal. Former Cork “shadow squad” player, Wesley O’Brien, came away with several balls as he defended deep. Trailing by four points and with three minutes left, Tom’s hit with a goal. Seamie Moore got the tip onto a high ball into the box, and an exciting finish was set up. Tom’s, however, could not find the equalizer and the last score of the game came from a Mike Allen free in injury time to make it safe. Joy for the rebels who could take another scalp or two before all is said and done.