Donegal dispatched Mayo with little difficulty in their senior football encounter. From start to finish Donegal looked the far stronger side. The forwards took a little while to get going, but once they did Donegal pulled away and never looked in danger of losing this game. 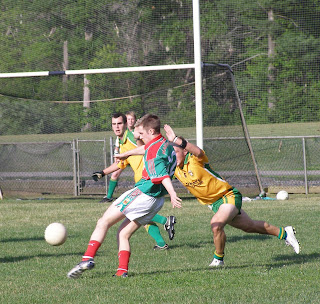 Barry O'Donovan Shoots as Cahir Healy Moves in to Block

An early goal put the northerners in the drivers seat and was a harbinger of what was to come for the rest of the game. Cahir Healy made a great run and when the Laois man pulled the trigger, his shot hit the post. The ball ended in the hands of Eddie Mangan who finished well. Kevin Curran and Mark McGowan followed with points before Mayo opened their account. Mayo’s most dangerous forward, Barry O’Donovan pointed well from a difficult angle. Donegal defended well and enjoyed the lions share of possession, but their finishing let them down on a number of occasions. In the early going the half backs showed the way on the scoring front as they surged forward. Corner forward Cormac Mullins missed a 21-yard free, but the Kerryman made up for it from the kickout with a point from play. Mullins’ free taking improved from then on as he did not miss another for the rest of the game. Mayo came into the game a little more as the half wore on, Stephen Hughes and O’Donovan pointed three times between them. Donegal, however, put some thumping points over the bar. Michael McGinty and Gavin Hoey each scored from distance to end the half and Donegal led by a score of 1-10 to 0-4. 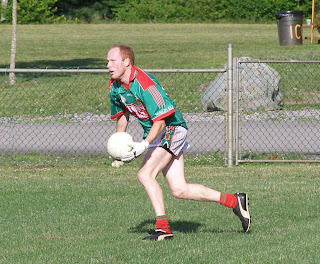 Pat Walsh Tries to Make Something Good Happen for Mayo

Donegal opened the second half with four points on the trot. Mangan, Hoey and Mark McGowan each pointed. Cahir Healy’s form continued at wing back and he broke up some promising looking Mayo attacks. After O’Donovan pointed for Mayo, Ian O’Dowd goaled - was a comeback on the cards or mere respectability? It proved to be the latter. Donegal were just too strong for the westerners. Eddie Mangan answered right away for Donegal with a second goal 12 minutes into the half, and substitute Ross Wherity made it three in the goals column for the Tir Chonaill men with the game reaching it’s inevitable conclusion. The St. Eunan’s Letterkenny clubman finished into the corner from a tight angle. Donegal ended the game with the final eight scores as they cruised to victory. Wherity caused plenty of problems after entering the game, and notched two additional points. The gangly youngster could become a permanent part of the team before the season is out.