The juniors of Cork and the Connemara Gaels got their seasons off to a start Sunday. The Gaels side featured 6 American Born players, while Cork had very much a new look team from last season. The teams went in at half time on level terms, but in spite of firing double digit wides over the 60 minutes, Cork had a little more firepower in the second half to run out comfortable winners as their superior fitness told. 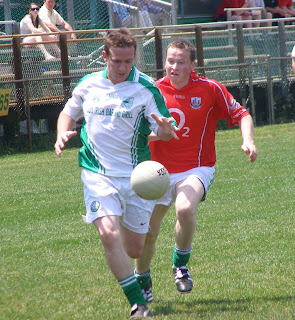 Joey Geoghan Runs Through for the Gaels.

Cork opened the scoring with 2 well- worked points, Mark Cahalane and Brian Rooney were the scorers. Kieran Lowe and Pat McDonnell worked hard in the Gaels back line to absorb the pressure as Cork looked to make their early advantage count. After several Cork wides, the Gaels hit back with three scores on the trot. A Joe Burke point was followed by a goal from Brian Joyce. The 17-year old got the final touch after some pinball in the goalmouth. Michael Kelly added a fine point from long range and after 18 minutes the Gaels led by three points. The rebels found their scoring touch towards the end of the half with three points on the trot to level matters for the interval. 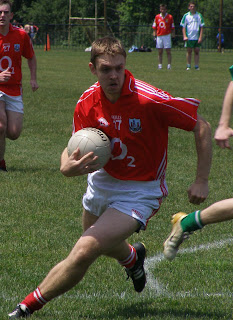 Mike Moynihan Entered the Fray in the Second Half.

Cork introduced Mike Moynihan for the second half, and Moynihan instantly put Cork a point ahead with a good score. This was followed by a fantastic long range score from Joe Regan, and Brian O’Loughlin made it a 3-point game in Cork’s favour after 10 minutes. Moynihan, however, showed some waywardness with his free-taking, and also missed a good opportunity at a goal. The Gaels tried to fight their way back into the game but were stymied by the Cork back line that held firm. Moynihan eventually pointed a free, and the result of the game was decided from the kickout. Mark Cahalane won the ball and put it right back over the keeper’s head into the back of the net. Cork now led by seven points.

The Gaels made a late run at Cork in the final 10 minutes and battled to the end. John O’Toole was called upon to make some point-blank saves for Cork, and eventually Brian Joyce netted for his second goal– it was the Gaels first score of the second half. Cahalane pointed to extend Cork’s lead to five points as time ran out on the Gaels. 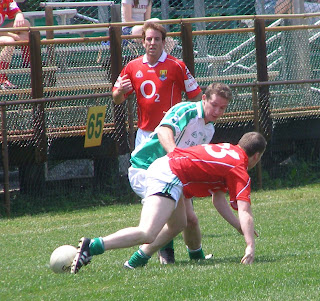 Tussle for the Ball.