With the surface of the main field in Canton sodden thanks to another week of rain, a spectacle was not on the cards. Not surprisingly there was a lot of hard work put in by both sides in the poor conditions. With an already strong side joined by Ryan Bradley, Donegal would have been favoured to win. The men from Tir Chonaill ended up comfortable winners on the scoreboard, but truth be told had the Shannon Blues not missed a plethora of chances in both halves the Donegal faithful would have been a lot more nervous come the last five or 10 minutes. After 20 minutes it looked as if Donegal could run away with the game, but the Blues started to dig in late in the first half. Things looked hopeful for a time, but the Blues never got close enough to put Donegal under some real pressure. 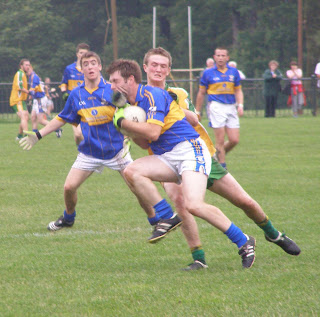 Paul O'Brien ties to break of defence for the Blues

Donegal dominated the first 20 minutes of the game. The northerners registered the first 5 points of the game, and a goal at that stage would have settled matters early. One almost came from Cormac Mullins whose shot hit the outside of the post as he bore down on goal. The Blues failed to score during that time, and had themselves partly to blame, kicking 6 bad wides in the first half. Corner forward, Eddie Mannion, opened the scoring for Donegal with a point in the first minute. Donegal defended well, not letting the Blues forwards find any sort of stride. Cahir Healy put in a good performance at corner back, as did Peter Fahy at wing back. Further scores came from Ryan Bradley, Kevin Curran, and the aforementioned Fahy. The Blues came back into the game for the final 10 minutes. The defence lifted the team as time and again the Donegal attack broke down and things did not come as easy for them as in the opening quarter. A bit of niggle came into the game and Brian Gallagher issued 4 yellow cards, two to each side for bad challenges. The Blues also lost keeper Declan Hawes to injury, and Ken Kileen came in to replace him. The Blues registered their first score of the game in the 28th minute – a free from corner forward Alan O’Donoghue. O’Donoghue soon followed with another, and with half time approaching, things looked brighter for the Blues. Eddie Mannion pointed a free just before the break to make it six points to two in Donegal’s favour at the half. 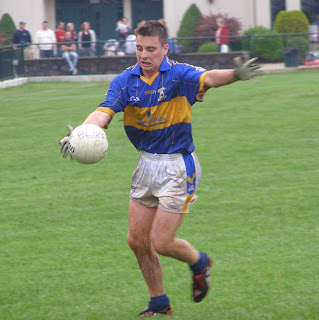 The Blues started the second period well, and registered the first score. Philip Lydon reduced the deficit to three points. Donegal’s response was immediate, and unfortunately for the Blues, it was in the form of a goal. A sweeping move after the kickout ended in Cormac Mullins sliding the ball under the advancing keeper. Now behind by 6 points, and scores at a premium, the Blues now had it all to do. O’Donoghue put a beautiful kick over the bar with eight minutes gone in the second half, but in spite of a lot of hard work, the Blues could not make significant inroads. The northerners pointed three times on the trot to kill off any chance the Blues had of getting a result, Bradley, Fahy, and Eddie Mannion were the scorers. With the game beyond them, the Blues continued to battle, and continued to waste good scoring chances. A hard fought win for Donegal, and with a little work on the shooting, the Blues could be there or thereabouts.