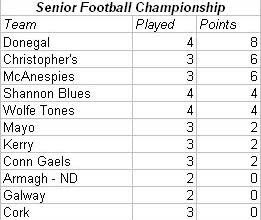 With the weathermen talking of record numbers of days without sun, it's as if the current state of the economy is not enough to dampen spirits, but the weather is also piling on the misery. The GAA schedule has been hard hit. Two mid-week games had to be postponed, and over the weekend all of Saturday's games and some of Sunday's games also had to be postponed making a total of 6 games to make up. They could not even be rescheduled for this week, so poor are conditions still.
In any case, following the fixtures that were played on the senior front, the Wolfe Tones have started to make a move towards the upper end of the table, and it looks like the Donegal McAnespies showdown on July 26 will be eagerly anticipated with both teams on full points. Barring an upset between now and then, things could well remain that way. Christopher's will have a few games to test them later in the year when they face the Wolfe Tones and the Gaels, while the Gaels themselves will need to pick it up to avoid finding themselves looking at the Intermediate playoffs again. The Shannon Blues should also be in the mix for the senior playoffs as they played hard against Donegal, but could not convert chances often enough to worry the northerners. Let's hope that July and August bring some relief from the wet and cold and things can get back on track.
Posted by Rory at 9:28 PM