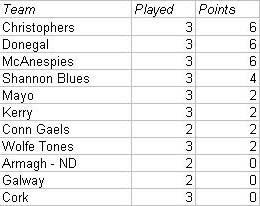 In spite of the miserable weather there was a full schedule of games on Sunday. Regretfully I did not get to the Irish Cultural Center. I was looking forward to going and bringing the kids (honestly), and have a father’s day dinner of chicken fingers and curry fries (curry sauce and chips) after the games, but after a night of rain Saturday night and persistent drizzle that varied from light to heavy during the day Sunday, I decided that I could not subject the kids (or myself) to the miserable conditions and try to get it together in what would likely be a press box bursting with humanity. Also, I was not going to head off on my own, sans enfants, for several hours given that it was father’s day. Anyway, I missed all Sunday’s action so no reports, my apologies.

And while we’re on the weather, for those of us living in the Boston area, it has been absolutely miserable. So far it has been more like what we were used to at home in Ireland. In June it has rained for 15 out of 21 days. Great for making the grass green and the garden grow, but lousy for those of us who were looking forward to some good summer weather.

I did get most of the results. McAnespies junior footballers beat the New England Celtics by a point, 1-12 to 4-5. Macs were well ahead at half time but the Celtics hit with a few second half goals to come charging back, but Macs kept their noses in front. In senior football Shannon Blues beat Kerry, McAnespies beat Cork, and Donegal beat Wolfe Tones by a goal, 2-5 to 1-5.
In senior Hurling Tipperary made it 2 out of 2 with a 0-11 to 0-8 win in conditions that were less than ideal for hurling. Tipp led by 0-9 to 0-4 at half time, and in spite of managing just 2 second half points did enough to put themselves alone on top of the table.
Posted by Rory at 10:15 PM

Who won between Cork and Fr Toms on Sunday? Thanks

Cork by 2 points, report will be up soon.