Just in case anybody was wondering how McAnespies look this year, the answer is that they look very good. Powered by the twin engines of Tyrone men Neil Donaghy and Colm Donnelly in the middle of the field, McAnespies had the Tones beaten in 20 minutes. The scary thing for the rest of the field in the Boston championship is that the Wolfe Tones are not half bad, but conceding 3 goals in the first 20 minutes is enough to knock the stuffing out of any team. The Tones came back a little in the second half, and showed that they can play some football, but the task was well beyond their capabilities by that stage. 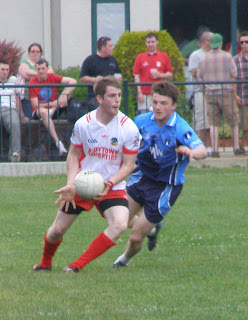 Jamie Kelly Introduced Himself to Boston with a Hat Trick.
Colm McCrory opened the scoring, and then won a penalty after being dragged down in the penalty area. McAnespies were going about their business ruthlessly from the get go. Alan Nestor expertly converted the penalty into the top left hand corner and the Tones were behind early. Before the Tones had time to gather themselves Donaghy and Jamie Kelly each pointed, and a second goal followed from Kelly. The St. Annes Bohernabreena man finished from close range. The neutral observers began to shake their heads as the hopes of a close game were fading – fast. Nestor converted McAnespies sixth score with a well-taken point, and the Macs Machine was 10 points ahead before the Tones had a chance to even mount an attack. McAnespies’ back line was more than equal to the task and stifled any attacking attempt from their Southie rivals. Marty Farrell – a star for the Tones from last year – pointed from a free after 18 minutes to get the Tones on the board, but it was a case of whatever you can do I can do better. McAnespies scored their third goal from the ensuing kickout. It was Kelly in the corner who finished – again from close range. Luke Sweetman, of Erin’s Isle fame, followed with a fine point. Farrell got a second point for the Tones, but Kelly’s hat trick came before half time as the Dubliner again converted his third chance well. 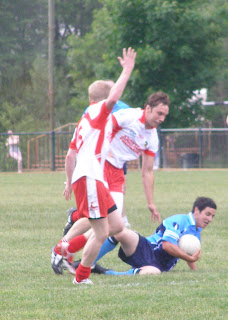 Marty Farrell and the Wolfe Tones did not get much Change from the McAnespies Back Line.
The Tones chances of overturning the 15-point deficit could be best described as slim. Some hard work and a Marty McGeough goal put a degree of respectability on the scoreboard. The Tones had to put a lot of effort in to get any return. Farrell scored from a free and after Colm McCrory canceled out the score, Conor Canning pointed for the Tones. The Tones did string a few scores together, two Farrell points and McGeough’s goal brought them within 3 goals, and just when you were thinking that another Tones goal could make it interesting, Colm Donnelly settled things down again with a point for McAnespies. Things had gotten a little ill tempered, and referee John Fitzpatrick eventually saw fit to send Joey Farrell off for a second offence. Donnelly pointed again for McAnespies, and David Wright even got himself in on the act, pulling off a fine save in the dying seconds. A message from the defending champions perhaps?