The New England Celtics recorded their first win at Junior A level thanks to a big second half performance from their big guns. Leading by a single point at half time, the veterans of the side lifted their performance and outplayed Cork in the second half, limiting the southerners to two Daniel Murphy points. 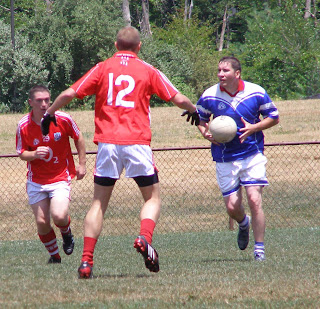 Kevin Fleming looks for an option for the Celtics.


The first half was an evenly contested affair with Kevin Cashman and Daniel Murphy accounting for Cork’s three first half points. At the other end it was Paudie Kenneally and Will Fleming who were on target for the Celtics. It was anybody’s game heading into the second half. 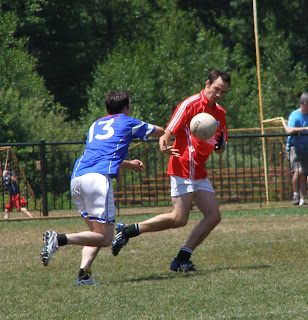 The Celtics fought hard to keep Cork from coming out of their own defence easily.


The Celtics came out guns blazing in the second half. Jerry Kenneally put a fine point over the bar and was followed by Pearse Lombard. Lombard had an impressive second half and recorded the two more points as the Celtics took a firm hold of the game. Cork’s defence battled gamely. Eoin Barry and Fergal Glynn tried to mount attacks in the direction of the Celtics end, but Greg Hawes was solid at corner back, and Kevin Fleming held his position well in the center. Dan Kenneally was a handful for Cork in the middle of the field. As the Celtics rolled the game slipped farther away from Cork. Dan Kenneally, Lombard, and Paudie Kenneally were on the mark down the stretch as the Celtics were in control. A great first win for the Celtics in their first season at the higher level, while Cork will probably agree that the answers were not there in the second half.