Crossmolina is back in the Christopher’s fold. When the chips were down it was Sean Kelly and Christopher’s who came through in a game that both sides needed badly to challenge for a place in the senior football playoffs. 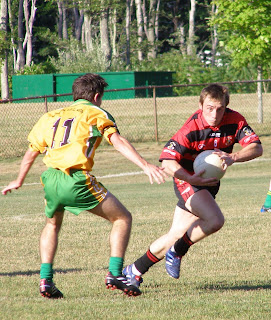 Christy Aylward comes out of defence for Christopher's as Brian Lafferty tries to contain.
Christopher’s blew hot and cold in the first half, while once Donegal settled down, the northerners played more consistent football. The game opened with Christopher’s corner forward, Cathal McNally, pointing a free and shortly afterwards finishing a good move with another point from play. In the eighth minute McNally brilliantly kept an Alan Moloney shot from going wide and turned inside his man to bury the ball. Christopher’s 1-2, Donegal no score. Donegal settled however. Conor McLarney pointed a free, and Conor Rafferty followed with two more from corner forward. Now Christopher’s were turning the ball over very easily coming out of defence, and Donegal looked like they had their act together with Gerard Reddin looking comfortable at center back with his duties of keeping Kelly quiet, and Donegal picking up the breaks in the middle of the field.
McNally proved his worth at just the right time however. Showing quick reactions, the Kildare man fisted a Keith Scally shot, that that dropped short, into the net, to relieve the pressure on Christopher’s. John O’Loughlin pointed for Donegal, while Alan Moloney sent a lovely shot over in response. Cooley Kickhams own Conor Rafferty sent a free over the bar for Donegal to leave the Tír Chonaill men in with a shout at the break. Christopher’s 2-3, Donegal 0-5. 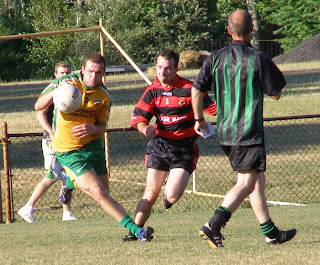 Donegal's Hugh McGinn tries to get around Noel Ryan as referee Nobby Walsh keeps a close eye.
Donegal came out in the second half and turned the tables by the time the half was 10 minutes old. Points came from Colm McLarney, a lovely left footed effort from Louth native Rafferty, and another Rafferty free. With Christopher’s defence under tremendous pressure Noel Ryan did well on several occasions to keep Donegal from totally overrunning the Christopher’s back line. O’Loughlin was motoring in the middle for Donegal, and a great ball from Brian Lafferty found Thomas Caldwell who fired home to put Donegal into a two point lead. Donegal, however, failed to keep the foot on the gas. With Christopher’s reeling, the northerners wasted a couple of chances to extend their new-found lead. Enter Christopher’s center forward, Kelly. Having had a quiet first 45 minutes, Kelly finished a well worked effort to bring Christopher’s within a point and a minute later leveled the game with a well taken point. Donegal then committed suicide as a careless pass coming out of defence resulted in a Christopher’s goal. Alan Moloney provided the finish. Christopher’s back on top.
Having had the momentum and seen it taken away, Donegal continued to shoot poorly and waste chances. Rafferty pointed a free, but Christopher’s answered with two. Moloney put another lovely shot over the bar, and Kelly finished a move that began with Ciaran McDonald bolting out of defence and setting up the score. A fourth goal sealed the deal for Christopher’s, and McNally completed his hat trick. Substitute Dave Ward played a good ball to McNally who fisted past the outcoming keeper. Having now lost three games, Donegal’s chances of making the senior playoffs hang by a thread, and a game against Aiden McAnespies is still to come. Having failed to do so last Sunday, Christopher’s closed the deal this week and are back on track.
Christopher’s: P. Kenneally, N. Ryan, C. McDonald, C. Aylward, B. McNally, B. Kelly, D. Kenneally, S. O’Hare, A. Moloney (1-2), S. Kelly (0-4), J. Kenneally, K. Scally, C. McNally (3-2). Donegal: M. Boyle, T. Maguire, N. Collins, D. Granagh, G. Reddin, D. McGowan, J. O’Loughlin (0-1), K. Lellis, C. Mclarney (0-2), K. Curran, B. Lafferty, C. Rafferty (0-7), H. McGinn. Sub, T. Caldwell (1-0), C. Corr (0-1).
By Rory O'Donnell
Posted by Rory at 11:57 PM