Cork 3-4 Kerry 1-12
Kerry came away with a two point win thanks to some accurate free taking from Dubliner, Robbie Croft, and a solid display from the back line. The Kingdom had the upper hand for most of the first half, but had to deal with a resurgent Cork in the second. Cork had Kerry sweating in the final minutes, but the rebels could not find the scoring touch in the dying minutes. 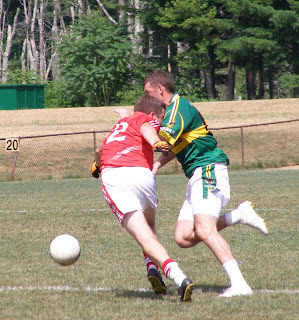 Kerry's Robbie Croft was a handful for Cillian O'Leary Sunday afternoon.
Kerry had the measure of Cork in the first 30 minutes. While Cork seemed hesitant in while in possession, Kerry seemed well aware of the route to goal. Robbie Croft’s place kicking was as reliable as ever, Croft missed just one free in the half. Cork’s back line worked very hard against a Kerry side that came forward in waves. Croft accounted for two points early in the half, however, a goal came for Cork thanks to a free from Shane McCarthy that dropped under the crossbar and Kerry keeper, Bernard O’Connor, misjudged the ball and it dropped into the net. Kerry came back, with Joe McGillicuddy in control at center back and Croft on form at corner forward, Kerry tallied a goal and four points to two points for Cork for the remainder of the half. James O’Sullivan sneaked behind the defence and was found with a well waited pass from Croft to put Kerry back on top. Croft accounted for three more Kerry scores before the half, one a fine sideline effort. At the half Kerry led by four, 1-6 to 1-2. 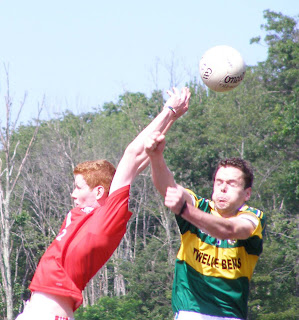 It was a fight to the end between Cork and Kerry in Canton.


Cork introduced Niall Devlin at corner forward and the Down man’s presence on the field paid immediate dividends. After Aaron Cahilane won the ball in his own back line, Devlin finished the move with a bullet inside the far post. Devlin’s presence added some purpose to Cork’s forays forward. Colin Crowley put Cork’s the best score of the game over the bar as he finished a sweeping upfield move. Croft’s free taking kept Kerry’s noses in front however. Cork’s much improved second half display almost resulted in another goal, but Devlin was unable to get to the end of the last pass across the face of goal. After Sean O’Leary put Kerry four points to the good, Cork struck with a third goal. Richard Murphy was found alone on the edge of the square by Devlin, and the midfielder finished well. Croft put Kerry two points ahead with another well sruck free from distance. Cork had some chances in the final minutes, but were unable to capitalize and Kerry enhance their chances of making the final four.