Cork 0-14 Galway 1-13
It was a little bit of a strange encounter between Cork and Galway on Sunday. Cork had called for a card check on the Galway players, an exercise that delayed proceedings by about 20 minutes. Once the Galway players were deemed to be legitimate, off we went. After a first half during which the scoreboard needed to be adjusted, Cork were ahead by three points, 0-11 to 1-5. Galway stormed back in the second half during which tempers flared on the sideline, and came out on top by two points thanks a stirring performance in which all 5 forwards scored. 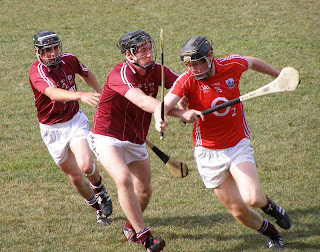 Cork and Galway slogged it out in Canton on Sunday.
Eoin McCormack opened the scoring for Cork with a free, while Shane Murphy answered for Galway from play. Willie O’Dwyer put Galway ahead with a point, and Enda Concannon then struck the only goal of the game, which put Galway ahead by four points in the early going. Eoin Whooley had it going in the middle of the field for Galway, while O’Dwyer at corner forward was in fine form. O’Dwyer struck three points from play in the half. Cork had Ritchie Ruth to thank for a solid midfield performance, and the rebels proved a match for their opponents in the first period. Ruth pointed a sideline mid-way through the half, and later put a well taken effort from play between the posts. The score of the half came with a free from Cork center back, Eoin McCormack, from his own 65. Eoin McCormack, at corner forward, added three more points to his tally and at the half Cork led on the scoreboard by 0-11 to 1-5.
After Ruth had extended Cork’s lead to four points, Galway had a chance to get within one when Shane Maher was brought down in the box. Maher himself stepped up to take the shot, but it was saved and scrambled away. Galway, however, did narrow the gap with points from Murphy, Stephen Dineen, and James Dowling. PeterMoloney put Cork back up by two with a point, but Maher and Murphy brought Galway level with a point each. After going for a goal with a 21-yard free – and missing, Eoin McCormack again put Cork ahead, but it was Galway who had more down the stretch. Willie Hyland put a great strike between the posts, and an O’Dwyer free put Galway ahead. Maher made sure with the final score of the game. Much disappointment for Cork as a big win just slipped from their grasp.