Cork lost the plot in the second half of their game with Galway. With the sides level at the half and Cork playing some good football, the rebels looked like they forgot the way to goal in the second period. That said, the teams were level going into the final 10 minutes and Cork had every chance, but it was Galway who worked better as a team in the latter stages and put some distance between them and their opponents. 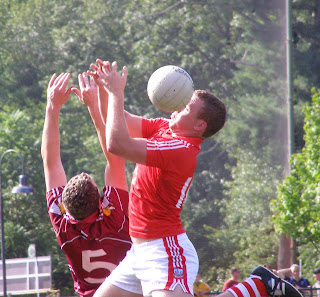 
Things were all square at the end of the first half. Cork goaled with about 20 minutes gone through Aaron Cahilane. Cork won the ball in the back line and thanks for some neat passing from their corner forwards, the ball found Cahilane barreling through the center and the Kerry native buried it. Stephen O’Donoghue worked hard in midfield for Cork throughout. Much of Cork’s possession came from the Bishopstown man’s hard work. Niall Devlin and Arlen Aherne had Cork’s first two points, and just before Cork’s goal from Cahilane, Colin Crowley almost netted for the southerners but JJ O’Neill cleared off the line. Cork wasted a good handful of scoring chances, while for their part Galway kept picking off the points. Even though it seemed that even though the ball spent more time in Cork hands, Galway kept pace and were more efficient with their chances. Dave Corbett opened their account, Gearoid O’Connor tallied three for the tribesmen in the first period. Peter Nolan put two over the bar – one with each foot, and Jarlath McGeeney also pointed for the westerners. Anthony Seymour and Aaron Cahilane accounted for the balance of Cork’s points, and at the half it was all square at 0-7 to 1-4. 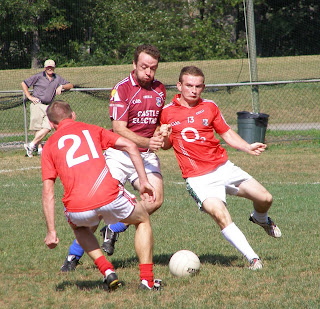 
Galway showed more guile going forward in the second half. Cork did not show much in the way of imagination and more often than not, returned the ball right back into Galway hands. When Cork did engineer a scoring chance the final effort was all too often a poor one. Also, the fact that center back, Aaron Cahilane, who had scored 1-1 in the first half, had to exit proceedings did not help the rebels cause. Galway looked the more dangerous side going forward. O’Connor and Ryan O’Dwyer combined well in the early going, and Jarlath McGeeney and Dave Corbett each pointed. Corbett could have had a goal, but blazed his effort over the bar after being played in well. Arlen Aherne pointed for Cork and then won the kickout; Shane McCarthy leveled the scores from the possession. After O’Connor put Galway one to the good with a free, Stephen O’Donoghue leveled again with a solo effort. O’Donoghue ran about 50 yards himself and popped the ball over – a score that was in fact indicative of Cork’s problems going forward. Danny Reddin then had a goal chance saved by John O’Toole at the other end, but Cork failed to clear and John Joe O’Neill pointed and was followed by Gearoid O’Connor to put Galway two up. Galway introduced Conrad Reilly and with the game still not over – a Cork goal could still win it – Reilly pointed three times in the final three minutes to secure the win for Galway.