Tipperary 2-16 Wexford 1-11
Tipperary secured a fine victory over Wexford in the senior hurling championship on Sunday afternoon. After a tight first half, Tipp put some daylight between themselves and their opponents. Martin Boran at center forward was an important cog in the Tipp machine, while Seamus Hickey at wing back was a persistent thorn in Wexford’s side. Wexford seemed unable to lift their game up a level to match their opponents when it came to crunch time. 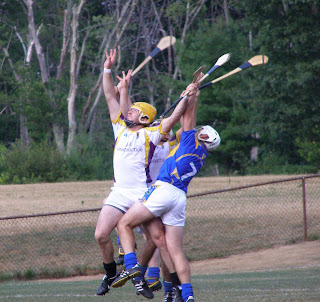 Wexford's Peter Ryan is in front for this dropping ball.
The first half was a close run affair, with Tipp holding the slightest of edges at the break. Tipp got off the mark first with a Colin Fennelly point which was answered by Stephen White for Tipp. Center forward Martin Boran and Fennelly extended Tipp’s lead before White notched another for Wexford. Tipp seemed to hold a slight edge and converted three more points. One was a fantastic score from Derek McNicholas who caught under pressure and turned to score from near the sideline. Wexford put their own flurry of scores together, which was marked by a Peter Ryan goal. White cut the Tipp lead in half, and Ryan latched onto the ball close to goal and neatly booted the ball home. All square. White and Tom Moloney then put Wexford ahead with a point each, but back came Tipp. McNicholas put another over the bar, Boran, Seamus Hickey and Cronan Dempsey tallied scores for Tipp before the break. At the half Tipp led by a point. 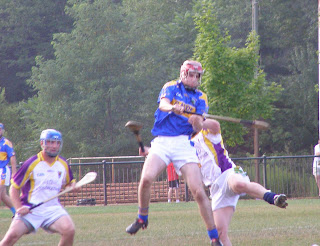 Tipp competed hard in the second half to take the win over their Wexford rivals.

Two Tipp goals in the second period sealed the deal. Wexford came out strong with JJ Kenny and Brian Dalton playing well in the back line, Gearoid O’Connor, Ger Fennelly, and White each pointed to put Wexford one to the good. Boran had pointed for Tipp. Following another Boran point to level the scores, the Erin’s Own man hit the back of the net and Tipp led by three. Gearoid O’Connor answered with a lovely strike for a point, but Tipp piled it on for the remainder of the game. Seamus Hickey was in great form at wing back for Tipp and put a fine effort over the bar, and substitute Paul McGrath added another to put Tipp four points ahead. Tipp then scored a fine goal as McGrath fed Boran who passed to the open Shane Bourke, and Bourke found the back of the net. Boran and Bourke added three points between them to finish the game.