Donegal left it until the second half to take this game by the scruff of the neck. Having played second fiddle to Galway for most of the first half, Donegal awoke in the second and played something like they would have expected of themselves. Going into the break level, Donegal came out and started the second half with purpose and ended up comfortable nine point victors. 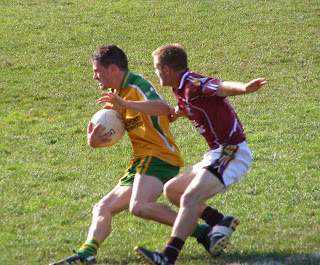 
Galway had Donegal on the ropes early. The Tribesmen moved the ball well with some smooth passing forays and went up a deserved four points to no score after 20 minutes. Danny Reddin opened the scoring with a point, and Gearoid O’Connor, who had just played an hour of hurling in very hot conditions, followed with a fine score. Galway squandered a handful of opportunites as Donegal were not in the game at all. After Conrad O’Reilly put Galway three up, Jarlath McGeeney made it four with a blast from close range that in truth could have easily gone under the bar for a goal. With Donegal offering little in the way of opposition, their mentors must have been at a loss to figure out what was not working. Eventually Conor Rafferty pointed on 24 minutes and the score seemed to open the sluice gates for the northerners. Rafferty followed with another and Brian Lafferty put two over before the signal for the break to even the scores. Donegal will have been the happier of the two sides given the dominance of Galway for the first 20 minutes. 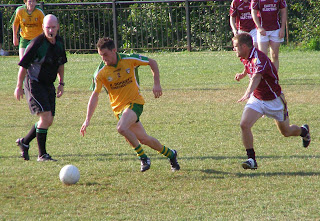 Thomas McGuire comes out of defence for Donegal as referee John Fitzpatrick keeps and eye on things.


Donegal woke up in the second half, and right from the throw in Paddy Kelly buried their first chance. With Kieran Lellis and Sean Burke working harder in midfield, and Rafferty and Kelly finally showing their pedigree, Donegal took the game by the scruff of the neck and started picking off the points. Rafferty and Lafferty added a point each as Donegal took a more direct route to goal in finding the dangermen with early balls. After Ger McArdle and Conor McAlary traded points Galway’s second half woes were underlined with Danny Reddin missing a close range free from the 21. Donegal put the final five points of the game over the bar without reply. Donegal will have been happy with the second half performance, but the overall performance seemed to lack consistency. A win for Galway would have been a major upset, nevertheless the westerners will have been disappointed that their second half performance came nowhere close to that of the first.