Donegal prevailed in a cracking game and finally produced the kind of performance many of us suspected that they were capable of delivering. The team was rejigged a little, with Kieran Lillis lining out at wing back, and Michael McGinty and Laoisman John O’Loughlin in midfield. McAnespies were more or less unchanged, however, Thomas Corrigan was carrying a hamstring injury and his having to leave the fray early did not help the cause of the South Boston based side. There was never much between the teams and plenty of yellow cards were issued, which kept a tense game under control. With about 10 minutes left in the game Donegal got the decisive score. With the sides level a Paddy Kelly goal proved to be the difference in the end. 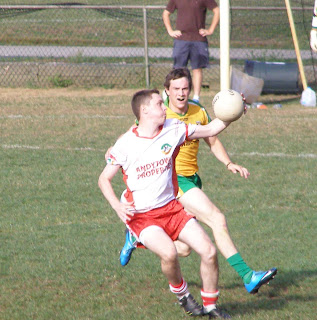 Conor McGourty showed his class with some fantastic scores for McAnespies.


The opening score of the game came from a Thomas Corrigan free kick after 2 minutes. Yellows were issued soon after to Colm McCrory and his marker Daniel Granagh. Donegal then went into surge mode. Lillis from wing back and O’Loughlin from midfield overran the McAnespies defences on several occasions, while Brian Lafferty was popping up all over the forward line and proving a handful for the McAnespies defencers.  Four points resulted for Donegal. Conor Rafferty, Lafferty and O’Loughlin (2) put Donegal three points ahead. There could have been a goal in there also, but the sure score was opted for in the early going. McAnespies hit right back with two beautiful points, one from each corner forward, Corrigan and CJ McGourty. Paddy Kelly pointed with 16 minutes gone and Lafferty extended Donegal’s lead to three with a free - the Ballybofey man was playing probably his best game in a Donegal shirt this year. Corrigan then had to leave the fray with his injury flaring, and Coleman Hands was brought in at wing back. McAnespies rearranged their positions to accommodate, but a player of Corrigan’s talent is a big loss to any side. 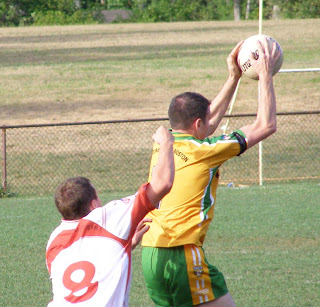 Michael McGinty had an important hand in Donegal's second half goal.


McAnespies then took the lead. McGourty pointed and followed with a goal after being fed by Conor Murray; Neil Donaghy had won the possession. More yellow cards were issued, Conor Rafferty and Tiernan Diamond were cautioned, Rafferty and his marker, Hands, seemed to be constantly in push and shove mode. Lafferty drew Donegal level with a point and McGourty made sure McAnespies went into the break a point up, 1-5 to 0-7.

The second half continued at the same high energy tempo as the first. Tony McClelland did well at center back from McAnespies and for Donegal, O’Loughlin took a more forward position on the edge of the square. Lafferty drew the sides level with a point, then Malin native Brian Kelly joined the ranks of the sinners as he was shown the eighth yellow of the game. Two Donegal points, one by Lafferty and the other from Rafferty, were sandwiched by scores from Colm McCrory and CJ McGourty. With about ten minutes to go the sides were level. Paddy Kelly then hit the goal that in the end decided the game. McGinty won the ball in the middle of the field and a long pass found Kelly who rounded the keeper and blasted home. McGourty narrowed the deficit to two points, but Donegal drove home their advantage in the final minutes. A point from Kelly, two more from O’Loughlin and a Lafferty free made it a five point game. Luke Sweetman and McGourty narrowed the gap to a goal in the waning minutes, but Donegal held on. The win rekindles some hope for Donegal of making the playoffs, regardless of the circumstances the Tír Chonaill men will take great satisfaction from the win.