Christopher’s came out on top in a tremendously exciting game where each side had a man sent off and had chances to win it in the closing stages. With the additional space afforded by the dismissals, and the 90 degree heat, fatigue began to show in the latter stages of the game. Christopher’s put in a fine performance throughout the field and once again came through when the chips were down. 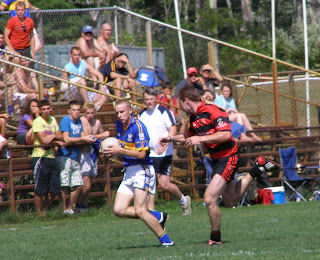 Alan Holland in posession for the Blues with Barry McNally in close pursuit.


With a stiff breeze in their favour, the Blues had the better of things during the first 30 minutes. The half opened with Alan Holland points from play answered with Cathal McNally scores from frees. The Blues put two points over from Shane Lannon and Enda Mullarkey before a pivotal incident reduced each side by a player. Dave Ward, who had just come on as a sub, and his marker JP Murphy, got into a bout of fisticuffs and each player was shown the line. Keith Scally made it three points for Christopher’s before Paul O’Connor and Holland each pointed to put the Blues three to the good at the break. 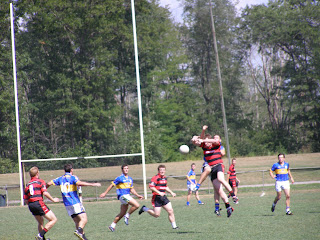 It all came down to the last two minutes between the Blues and Christopher's on Sunday.


The Blues started the second half with a point resulting from a fine move that started with corner back Shane Kelly and ended with O’Connor taking the score. Christopher’s then began to take over proceedings. That breeze was now in their favour, and midfielders Dan Kenneally and Sean O’Hare kept the ball from traveling beyond the Blues half for an extended period. Cathal McNally pointed from a free to cut the deficit to two points. Shortly afterwards McNally was through on goal after superbly gathering a great ball over the top, but Declan Hawes was equal to the shot and put the ball out for a 45. O’Hare put the resulting 45 over the bar with room to spare, then came the goal. A similar chance to the previous one was put away by McNally as he picked a higher spot the second time, and Christopher’s were now on top. Barry McNally steamed through from center back and put Christopher’s two up, but Paul O’Connor and Ken Kileen points leveled the scores for the Blues with 10 minutes to go.

The game hung in the balance as the minutes ticked away, and the Blues were back and very much in it again. O’Connor had a chance to put the Blues up after O’Hare was blown for a pickup, but his curling free from about 45 yards hit the outside of the post. Cathal McNally then had chance from a free and a similar distance for Christopher’s, and the ball sailed over with the breeze. From the kickout Christopher’s went two points ahead after Sean Kelly found McNally with a great pass and the Kildare man provided the insurance point with the game in injury time. The Blues had one last chance to try to snatch a goal and dropped a 45 into the penalty area, but Christopher’s packed the box and came away with the ball – and a very valuable win.

Yes, and came from behind to win the last 2 games.