Shamrocks 3-12 Tir na nÓg 0-7
A blistering performance on a hot day in Canton propelled the Boston Shamrocks to a comprehensive victory over Tir na nÓg in the ladies senior football. The Shamrocks played some good passing football and controlled all but a period of the first half. Charlotte Delaney at corner forward tallied a second half hat trick as the Shamrocks ran out 14 point victors over their Brighton based rivals. 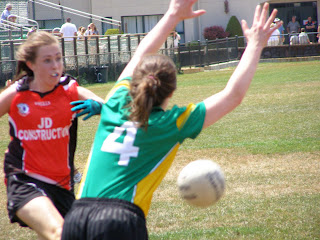 Laurie Ahern gets a shot in despite Jane O'Donoghue's attempt to block.


The Shamrocks dominated the first 15minutes of the game. In spite of their best efforts, Tir na nÓg could not make any inroads getting the ball past the half way line. After Sinead Fadden and Sarah Maloney each pointed for the Shamrocks, the Dorchester side booted some good chances wide of the posts. After 15 minutes Charlotte Delaney put the Shamrocks three points to no score ahead, but in truth there should have been more points registered for the ladies in green. Tir na nÓg managed to lift the siege in the second 15 minutes of the half. Andrea Bowie made some runs down the wing and Emma Conlon came into the game more. Niamh Coleman and Conlon each pointed, and Laurie Ahern put two nice points over the bar in succession. Delaney responded for the Shamrocks and at the break the sides were level at four points each. 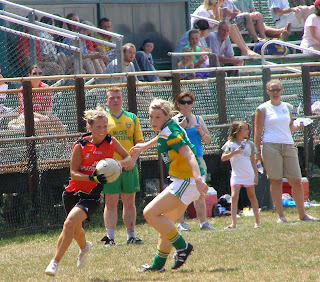 Andrea Bowie makes a foray down the wing for Tir na nOg.
The Shamrocks were too much for their opponents to handle in the second half. Delaney scored a hat trick of goals, one of which had an air of good fortune. After Tir na nÓg put three early chances wide, one of which could have been a goal, the Shamrocks took over the game. Catriona Dolan and Joanne O’Connell dominated the back line, and up front Delaney was on in form. Delaney finished a close range effort, Catriona Treanor pointed, and Delaney’s second goal came after an effort at a point dropped into the net. Treanor put a great individual effort over the bar, and Delaney added her third point of the day. The half was 15 minutes old before the Brighton ladies added a score, and it came from Laurie Ahern. Niamh Coleman put another over from the kickout, but the Shamrocks juggernaut would not be stopped. Delaney finished her hat trick in style with a blast to the far post from 20 yards, while subs Deirdre Kelleher and Ciara Murphy added to the points column. It was a great performance from the Shamrocks and some work will be required on the training field in Brighton if Tir na nÓg are to retain the senior championship.
Shamrocks: K. Rosedale, J. O’Connell, C. Dolan, J. O’Donoghue, A. McDonnell, N. Woods, N. Hurst, E. Burns, M. Kavanagh, J. Sloane, C. Treanor (0-3), S. Maloney (0-1), C. Delaney (3-3), S. Fadden (0-2), T. Doherty. Sub, M. Corrigan (0-2), C. Murphy (0-1). Tir na nÓg: D. Kelleher, L. Gilmore, L. Brick, A. Waters, A. Bowie, A. Kelly, N. Daly, E. Conlon (0-2), L. Nerney, A. Creegan, L. Ahern (0-3), T. Moran, C. Kelly, N. Coleman (0-2), G. Collary.