Shannon Blues survived a late Connemara Gaels surge to escape two point winners in the last game of the day Sunday, The Fourth of July. Having led by six points at half time, and by eight mid-way through the second, the Blues almost saw a Gaels side that battled to the bitter end steal two championship points. 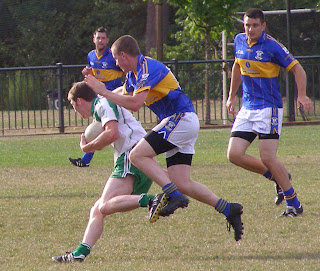 Shannon Blues Pat Murray tries to stop the Gaels James Donnelly.
The Gaels struggled through the first fifteen minutes of the game. The Blues outscored their opponents five points to one in the opening quarter. Paul O’Connor proved deadly at corner forward for the Blues, and JP Murray at wing back made some penetrating runs that had the Gaels rearguard scrambling to cover. Points came from O’Connor and Alan Holland; the corner forwards put all seven Blues first half points over between them. Pat McNicholas defended well for the Gaels, but it was from the middle of the field forward that the Gaels floundered. The Blues defence had the shutters down and getting through proved a difficult task. The bar was well and truly closed. Eventually the Gaels found a route to goal, mainly though the boot of Coleman Mulkerrins. The Carna/Cashel man put three expertly taken frees over the bar, and Sean Conneelly accounted for the Gaels fourth first half point. With the Gaels having dragged themselves within three points coming up to half time, two things happened to make the hole they stood in deeper. First, Mulkerrins started missing his kicks, three frees went awry. Second, the on form Paul O’Connor netted a goal just before the half time whistle as the Gaels lost their way coming out of defence. At the half the Blues led by a score of 1-7 to 0-4.
The Gaels started the second half on top, aiming to overturn the deficit. A well taken Shane Cashen point was followed with another from Michael Lundy. Murphy sprang into action for the Blues again, and set up substitute Ken Kileen for Blues point, and soon afterwards O’Connor found the net again for the Blues with a well taken goal. The Blues looked on track for a comfortable win. The Gaels started to make some changes and brought in some fresh legs. Sean Conneeley pointed and Mulkerrins followed with another as time became a concern for the Westerners. JP Murphy, the type of wing back that wing forwards hate to have as a marker, again sliced through the Gaels defence and this time took his own point. The Gaels continued to press and had some chances that were put badly wide, but a much needed goal came. Shane Cashen finished nicely into the far corner from a close angle, and now there were four points in it. 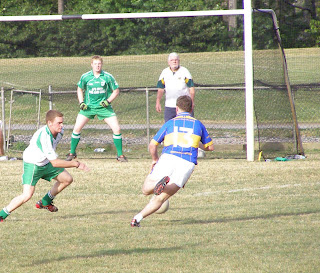 Paul O'Connor motors though for the Blues as Pat McNicholas moves in to cover.
The Blues answered well however. Two quick points, the second from O’Connor, surely would shake off the Connemara men. Not so. Martin Coady pointed and a Sean Conneeley goal with time almost up made it a two point game. Who else but O’Connor again answered for the Blues with a good score to make it a three point game again. Michael Lundy put a last point over the bar for the Gaels, but it was not enough for the westerners to complete an unlikely comeback. The Blues chalk up another win, while the Gaels are left wondering what might have been.
Gaels: C. O’Sullivan, E. Sullivan, P. McNicholas, R. Dooher, A. Kelly, D. Ryan, J. Donnelly, A. O’Neill, S. Cashen (1-1), C. Mulkerrins (0-4), M. Lundy (0-2), M. Kane, S. Conneelly (1-2). Sub, M. Coady (0-1). Blues: D. Hawes, S. Kelly, N. Galvin, JP Murphy (0-1), D. McElligott, L. Jennings, S. Lannon, M. O’Brien, P. McGee, P. Murray, E. Mullarkey, P. O’Connor (2-7), A. Holland (0-2). Sub; K. Kileen (0-1).
By Rory O'Donnell
Posted by Rory at 11:41 PM