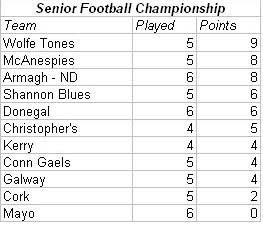 With each team on 4 points, but with Kerry having one less game played, the Kingdom sits in a slightly better position than the Gaels. Both teams have some tough games coming up and a win here will provide a boost. Kerry’s obvious strong point is their front man, Robbie Croft. Croft has been an invaluable asset to the green and gold this year, and the Gaels will have their work cut out to keep the Dubliner reined in. Kerry are also strong in the half back line. With Joe McGillicuddy and Sean O’Leary manning the first line of defence and with Michael Geaney at center forward, Kerry have talent spread throughout the field. The Gaels have a finely balanced side, though they have not won the “must wins” this year. Having almost turned the high flying Shannon Blues, the Gaels came a cropper against Armagh-Notre Dame despite having a man advantage for most of the game. However, if the Gaels have a good game in them no better time than now to come out with it.  With three games left and a chance to still finish on 10 points, the Connemara men still have everything to play for. If the Gaels can find an answer to Croft and get good performances from key players Coleman Mulkerrins and Andy O’Neill, they could pull off a morale boosting win.

Coming off last week’s loss to Christopher’s, the Blues need a win against the as yet unbeaten Wolfe Tones. With two losses, a third could jeopardize last year’s finalists chances of making another appearance in the playoffs. The Blues could be without key player JP Murphy at wing back, which would hurt their chances. For their part, there are questions over the availability of Dean Rock and Gary Brilly to play for the Tones on Sunday. The Blues will be looking to their full forward line to keep the Tones under pressure, and Denis McElligott to hold the fort at center back. The Tones corner backs will have their hands full, so keeping the supply of ball restricted will be key for them. Joey Farrell, Mick Magee, and Marty Farrell will be key to the Tones chances of maintaining their unbeaten run. Hard to call the game, but the Tones could be slow out of the gate after a couple of weeks without a game, and with the Blues badly needing the win, I will go with last years finalists to take two points from the game.

Tipperary are well on their way to senior hurling the playoffs, while Tom’s are in desperate need of a win. Tipp are coming off a convincing win against arch rivals, Wexford. The Tipp forward line has shown itself to be capable of spreading out the scoring burden, and while Martin Boran, the former Kilkenny intermediate hurler, is the main source, the other 4 forwards can take a point at any time. Tom’s struggled to generate scores in the second half of their last outing against Galway while without the services of Fran Keenan. Also, things do not appear to be working in Tom’s favour on the personnel front. Center back, Darryl Dooley is clearly nursing a hamstring, and Ciaran Moore may be unavailable after being sent off in the previous outing. Regardless, if Tom’s are to come out on top the other front men will be required to find their scoring touch. Perhaps Tom’s can life themselves for a game against the top team, but Tipp is where most of the money will be.

With Roscommon out for this year, the Boston Shamrocks and Tir na nOg are playing a best of 5 for the ladies championship. The series is even at one game each, so this game is critical. The second game, from which the Shamrocks emerged victorious, was quite the opposite of the first – which Tir na nOg won comprehensively. The Shamrocks’ corner forward, Charlotte Delaney required some stopping. Delaney ran riot in her last outing. Tir na nOg will be looking to key players Laurie Aherne, Andrea Bowie, and Emma Conlon to lead a turnaround for the Brighton side. This is the pivotal game that neither side will want to lose, and it should be a good one.