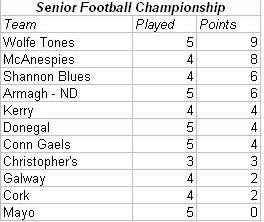 
In a repeat of last season’s Boston final, Shannon Blues will be eager to gain a measure of revenge against the champions. Christopher’s on the other hand, will be anxious to put two more championship points on the board in order to move quickly up the table and closer to the top four. The game presents some interesting sub-plots. Dermot McElligott lining out at center back for the Blues will have a tough assignment in marking Sean Kelly at center forward for Christopher’s, it will be interesting to see who comes out on top there. It will also be interesting to see who will come out on top in the midfield battle. Christopher’s midfielders, Dan Kenneally and Sean O’Hare might have an edge over their counterparts. The Blues prolific scoring full forward line of Paul O’Connor and Alan Holland will give Christopher’s management some food for thought in how to try an minimize the threat. The game is a tough call, but I expect to see a close game that will be decided by no more than a score.


With Cork still looking for a win this season, along with Wexford coming off a loss last weekend to Tipperary, both sides should be approaching this game with every intention of giving 100%. Cork will have their work cut out however. Wexford’s forward line contains an array of scoring players, while in the middle of the field Stephen White has a good engine and a great eye for the posts. With Dominic Magill anchoring the back line Wexford appear to possess the better hand. Cork were unlucky in their last outing against a strong Galway side, and there are several players who the rebels will be looking to in order to pull off a win. Ronan Good in the half back line, Ritchie Ruth in the middle of the field and Eoin McCormack will cause problems for Wexford. I’d expect to see a competitive game, but would be surprised should Cork pull off an unlikely victory.


There is no love lost between these two sides who have dominated the Boston football scene between them over the last several years. This year has been a struggle for Donegal so far, however. On the other hand, McAnespies have looked very strong since their opening game against Mayo, and the northerners received a boost with CJ McGourty getting the blessing of Croke Park to play. With strength in every sector of the field McAnespies will be hard to beat this year. Donegal have plenty of talent themselves, and will need the likes of Paddy Kelly, Conor Rafferty, and Kieran Lillis to produce their best if the Tir Chonaill men are to prevail. Donegal have under-performed so far this year and given their opponents I expect them to raise their game. The northerners would love nothing more than to produce an upset win over their arch rivals, but then again McAnespies too will be looking for nothing less than a convincing win.