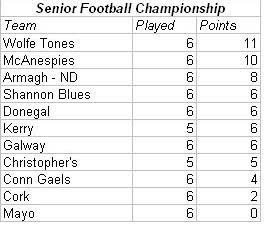 This is Armagh-Notre Dame’s biggest game of the season, and the first of two tough games, one of which the Brighton side need to win to really have a shot at making the senior semi-finals. The Tones sit atop the table, and while a win guarantees a semi-final place the pressure on the South Boston side is not quite as great to pull it out. The Orchard men will be tested in every facet of the game against a team that impressed in their last outing against Shannon Blues. Armagh-Notre Dame have a lot going for them with some firepower in the forward line. David Quinn, who joined the Brighton side from Na Fianna in Dublin, has taken advantage of the extra space afforded in the two man full forward line, and Seamie O’Hare has also thrived at wing forward. Where the game will be won or lost for the underdogs is in the back line. Can they hold the dangerous Dan McCabe or his County Down compatriot, Marty Farrell? If so, this could be a close run affair, if not the Brighton side could be looking to beat Shannon Blues in their last game – a position they do not want to be in, while the Tones could be sitting back with the first of the season's objectives taken care of.

Here we go, a repeat of last year’s semi-final. Christopher’s have to win this game or it is more than likely curtains for their hopes of defending the senior championship crown. Following last week’s shock loss to Galway, a lot of questions are being asked of Christopher’s, probably no more than by themselves. McAnespies are far from invincible as Donegal showed two weeks ago, however, as Donegal also showed, it takes bringing your "A Plus" game with you to come out on top against one of Boston's best. Christopher’s have some very strong players covering most areas of the field and will need some big performances to pull off the win. The middle of the field is an obvious area of strength with Dan Kenneally and Sean O’Hare forming what probably is the best midfield pairing of any team.  Christopher’s will be looking to the likes of Alan Maloney and Keith Scally in the forward line to take some pressure off Sean Kelly and Cathal McNally.  McNally has been doing it all season for Christopher's but if they have championship designs, Christopher's cannot continue to rely on getting high scoring performances from the Kildare man.  McAnespies will field a team, that if they click, can play some virtually flawless football.  The 2008 champions have a good blend of class and strength. Brendan McGarr has a great engine in the middle of the field, and a very strong half back line can put up a wall against the best of forward lines. Colm McCrory in the forward line is due a breakout game, while a close eye will be required to limit the damage CJ McGourty is capable of causing. Hard to call, but if I were to pick a winner, McAnespies forward line could win the day in the end.

Both teams are coming off wins in their previous games.  Last week table toppers Tipp looked very impressive, but face a tough test against a strong Galway side. Galway’s forward line look very good and presents a triple threat with the sharp shooting Shane Murphy, Willie Hyland, and Willie O’Dwyer. The tribesmen will also need to be disciplined at the back as Tipp free taker, Martin Boran, will not miss too many frees within 70 yards. Tipp have several dangerous forwards to pick from and should they get motoring Galway could be in trouble. Shane Bourke, Boran, and Derek McNicholas will need to be kept on a short leash, and Galway’s half back line will need to weather a lot of pressure. The more open the game is, the more it could suit Tipp who, when given the room, have shown an ability to almost score at will.  The scores have not come as freely for Galway so far this year. If Galway can keep it tight the westerners are in with a good chance, if Tipp can get ahead early and have Galway chasing the game, they could come out of it with their 100% record intact.
Posted by Rory at 10:20 PM