It was a frustrating day for Kerry as the Kingdom went down to a heavy defeat against table toppers, Aiden McAnespies. Kerry managed to keep the deficit down to four points for much of the game, and in fairness a goal would have given their opponents something to think about, but in the final 15 minutes McAnespies pulled away with seven unanswered scores to register a comfortable victory. 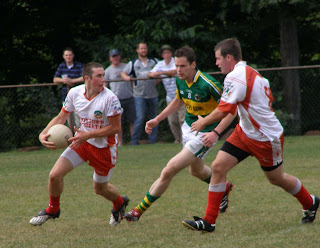 Donnacha Tobin comes away with a breaking ball for Aiden McAnespies.
Thomas Corrigan was the man first on the scoresheet with a point, while Kerry answered through Robbie Croft and James O’Sullivan – Kerry ahead in the early going. Donnacha Tobin banged in a goal, and between them Corrigan and Conor John McGourty added three points between them to put McAnespies ahead by five. Kerry enjoyed a good spell of football and generated some goal chances all of which shot across the face of goal and wide. All the southerners had to show for a period on top was a solitary Croft point. At the half McAnespies held a five point lead. 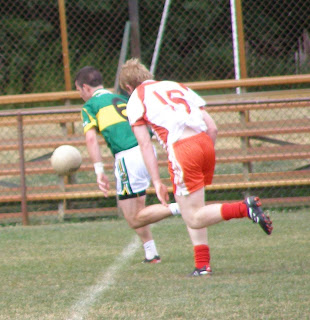 Sean Leahy makes a foray forward for the Kingdom.
One wondered had Kerry run out of ammunition in the first half, but they had some good football in them. Joe McGillicuddy and ColmMoriarty continued to work hard in midfield, while Croft toiled up front with seemingly endless reserves of energy. Kerry won a penalty for a foot block, and Croft took it well to bring Kerry within four points. Colm McCrory and Joe McGillicuddy exchanged points, and then it all ended for the Kerrymen. Things opened up in the Kerry back line as tiredness took its toll. McGourty registered a goal and four points before all was said and done, while Murray, Corrigan, and super sub, Luke Sweetman, tagged on additional scores. McAnespies strength throughout the field told in the end, and the northerners are now top with four wins from four games.
Macs: S. Connolly, D. Wylie, M. Boyne, C. O’Sullivan, T. McClelland, D. Tobin (1-0), N. Donaghy, B. McGarr, C. Murray (0-2), T. Diamond, C. McCrory, CJ McGourty (1-8), T. Corrigan (0-4). Sub, L. Sweetman (0-1). Kerry: S. Hogan, A. Fenton, S. Hogan, M. Godley, J. McGillicuddy (0-2), S. Leahy, D. Loughlin, C. Moriarty, J. Molloy, M. Moffatt, M. Geaney, R. Croft (1-4), J. O’Sullivan (0-1).
By Rory O'Donnell
Posted by Rory at 10:43 PM