The scoreline tells the story for this game. A comfortable win for McAnespies who had little to worry about once they took the lead after 5 minutes. Mayo never looked like they felt that they could pull off an upset and for much of the game the outcome was inevitable. Don O’Malley managed to keep a clean sheet for Mayo for 59 minutes, until Colm McCrory netted at the death to rob Mayo of even that bright spot to an otherwise forgettable day for the westerners. 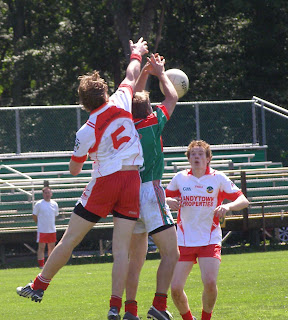 Keith Hudson has matters in hand at center back for McAnespies.
Once things got warmed up McAnespies started to cruise and opened up comfortable lead. The sides were on a level footing after five minutes with 2 points each. Keith Hudson and Colm McCrory pointed for McAnespies, while Barry O’Donovan was on the mark for Mayo. Once Alan Nestor put McAnespies one to the good from a free the South Boston side cruised without looking like they were overextending themselves. The only interruption to the one way traffic was a point from Barry O’Donovan. Mayo did make an occasional foray into McAnespie’s territory, but the Macs back five mopped up with reasonable comfort. Colm Donnelly finished an incisive move to put McAnespies four points to the good after 15 minutes, while McCrory and Nestor clocked up the points tally between them. At the half McAnespies led by 0-11 to 0-3, and all the while looking like they could raise the tempo if needed. 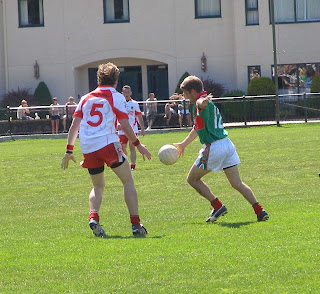 Kevin McAllister finds room to play the ball into the corner.
The second half continued as the first ended. A Rory Maguire point was followed by a pointed McCrory free. Barry O’Donovan bucked the trend and netted for Mayo, after Stephen Hughes supplied the pass, finishing the best move of the afternoon for the westerners. Macs answered with three points over the following five minutes. Colm McCrory picked things it up in the speed department and finished two sweeping moves for points, though it was clear that a goal was on his mind. Luke Sweetman got credit for the third point. Sweetman had the goal at his mercy, but Don O’Malley got down well to deflect the shot over the bar. Mayo kept Macs from netting a goal and put some respectability on the scoreboard, and seemed to apply themselves a bit better late in the day. There were a couple of occasions where McAnespies defence had to put some work in. Kevin McAllister pointed twice for Mayo, one could have been a second goal for Mayo but the ball floated over the bar from close range. McCrory eventually put one in the goal column for McAnespies. With time almost up, the Monaghan man put first time shot in the top corner from close range denying Mayo a clean sheet. Macs still unbeaten, while Mayo are no doubt looking to put this one behind them.