Tom’s needed the win to get their challenge for a playoff place off the ground, and playing old rivals Galway provided plenty of motivation. Galway had some notable absences from their lineup and stuttered and stammered and never got any flow going while Tom’s displayed more conviction up front and in defence, as well as having the Maurice Callinan scoring machine to rely on. Two late goals in the first half put Tom’s into a comfortable lead at the break, and Galway never looked like making a game of it in the second. 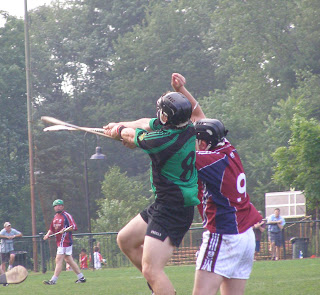 Fr. Tom's Cahir Healy and Galway's Evan Daniels contest a puckout.
Tom’s got off to the best start possible with a goal after two minutes from Maurice Callinan. Playing at wing forward, Callinan proved to be a lucrative scoring outlet for Tom’s both from play and from the dead ball. Callinan followed up the goal with a pointed free after James Kinsella got Galway off the mark with a fine point. After Cahir Healy added to Tom’s lead with a point, Galway put a couple of chances from frees wide of the posts, a measure of how the afternoon would go for the maroon and white. There were yellows issued for a dangerous challenge from Tom’s Darryl Dooley and the reaction of Galway corner back, Peter Buckredge. The sides traded scores before Tom’s hit with a second goal from John Cuddy as Tom’s took advantage of some hesitation in the Galway defence. Shortly afterwards, Eanna Murphy, a goalscorer in Tom’s last outing, made it three in the goal column for Tom’s. Tom’s rode the wave until the half time whistle adding three more points from Callnan (2) and a fine long range strike from Cuddy. 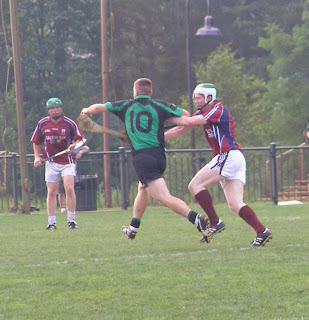 Trevor Kelly bursts through the Galway cover.
The Gap between the teams remained unchanged for the next fifteen minutes. Galway made a better first of it in the second period and matched Tom’s in the points column, but a much needed goal did not come for the tribesmen. It almost did as Danny Fitzgerald first kicked the ball off the underside of the bar, and in the ensuing scramble Galway won a penalty. John Moylan took it well, but again, the crossbar denied Galway. Evan Daniels mopped up with a point, but that was not what Galway needed. John Moylan pointed twice, but as if to rub the salt in, substitute Ger Hennelly goaled for Tom’s with minutes left on the clock. A good day for Tom’s and one that Galway would rather forget as Tom’s junior’s also inflicted a heavy defeat on Galway’s reserves earlier in the day.