The Connemara Gaels demolished Mayo on Sunday afternoon. Needing a win to get back on track towards a senior playoff spot, the Gaels took care of business in a one sided game. In the second half the game degenerated into target practice for the Gaels forwards as Mayo were unable to match their opponents in any facet of the game. 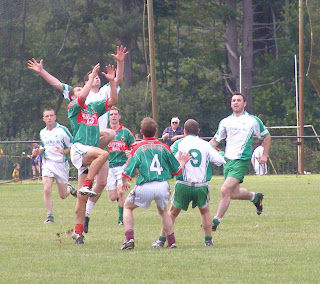 Midfielders rise as Kieran Cox (9) and Mike Carolan (4) ready themselves for the breaking ball.

The tone was set right from the start as each of the Gaels' corner forwards helped themselves to a goal. Galwayman Michael Martin and Tyrone native Mark Dougan each netted in the first five minutes. After the Gaels went ahead on an unusual looking score of 2-0, Mayo pointed twice and it looked like there may be a game on. Barry O’Donovan and Dan Murphy each pointed for Mayo. However, it was not to be. The Gaels pointed seven times without reply as the traffic was all in one direction for the remainder of the half. Dougan and Martin put six over the bar between them , while 2007 All-Ireland winning Galway minor John O’Brien accounted for the odd score from wing forward. The Gaels led by a score of 2-6 to 0-2 at the break. 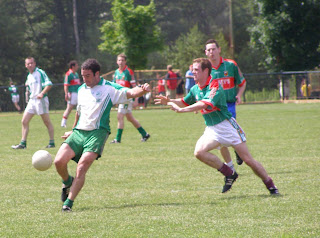 Michael Magill puts his second point over the bar.

The second half continued as the first ended. The Gaels' subs got a good run as the westerners pointed eight times before Mayo scored a consolation goal in the final quarter. Derryman Fergal Doyle and Colin Harkin controlled matters in midfield, while at the back the Gaels defenders did not have too much to bother them. Paudi Walsh eventually put the ball away for Mayo with a good finish, but the goal had no impact on the game. The Gaels corner forwards continued their impressive shooting, and Michael Magill added a couple of points to the total. The win puts the Gaels back on track for a top 4 spot.