Tipperary put paid to a game Cork side with a good display from the half back line and some timely goals late in the first half. As would be expected from an encounter between the Munster giants, the game got a little testy and referee Trevor Kelly saw fit to issue some yellow cards on occasion to keep the players minds focused in the right direction. After establishing an early lead, Cork conceded three quick goals before half time, which ultimately proved to be their undoing. 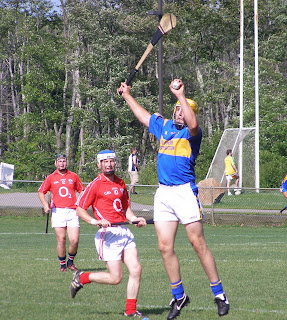 David Young played well at center back for Tipp .
Cork took the field well kitted out and started the game well to boot. Paul Mannix saved well early in the game to prevent a Tipp goal, and Ronan Good opened the scoring with a fine point from wing back. Shane Menton answered for Tipp, while Mike Allen and Paul McGrath then traded points. Cork’s good play was rewarded with a goal after 10 minutes. Allen made a run and handpassed across the face of goal for Darragh Cotter to double on from close range. Cork stretched the lead to four points, and Kelly issued the first of the bookings as the niggle crept in. Tipp lifted their game on the half back line, thanks in large part to David Young and Eoin Ryan, and the lift in their efforts was underlined by a determined score from Paul McGrath. However, the rebels seemed to be holding their own. Then Tipp struck with three quick goals in the last 10 minutes of the half. Pat Howard booted the first over the line after a great run from midfielder Brian Howley, then a minute later David Young dropped a tame looking high ball into the box and Shane Menton stretched to clip the ball into the corner of the net. Just before the half time whistle, Menton scored Tipp’s third goal to put them five points ahead. Mike Allen pulled a point back for Cork just before the half time whistle. 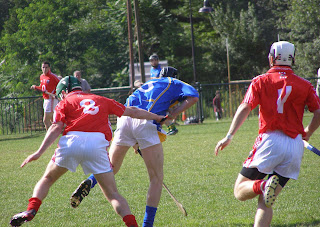 Tipp's Brian Howley bursts through the Cork rearguard to set up Tipp's first goal.
Cork tried to lift it in the second, but never got closer than the four points that separated the teams at half time. Tipp pointed through Paul McGrath right from the re-start, and Menton and Pat Howard added to the Tipp tally. Then two more bookings came. Allen and Michael Lyons got Cork back to within four points, but then a Tipp goal effectively ended the contest. A ball down the middle was left up to Paul Mannix in goal for Cork and Pat Howard to challenge, and the ball ended up breaking into the back of the Cork net. End of story for Cork. Cork did continue to press but could not penetrate the Tipp rearguard, who did well when called upon. Tipp added scores from Menton, and a fine point from Young. Pat Howard and Cronan Dempsey put the icing on the cake with scores at the death for Tipp to put them into a solid second place in the standings.