The last game of the day featured the hurlers of Galway and Cork. There were some flashes of good hurling from each side and some fine scores. Unfortunately for those who came to see a good game of hurling, the main talking point after the game concerned the fighting that occurred on two occasions between almost all the players on the field. Galway opened the game looking like a comfortable win would be on the cards and led by eight points to three after 20 minutes. Cork came back with the last 4 scores of the half, one a goal, and set the stage for what should have been an exciting second period. However, rather than focus their attention on hurling, fights broke out where most players from each side joined in the fray. The epicenter of the first resulted from some off the ball jabbing with the hurley between Cork corner back Kevin Price and Galway’s John Moylan. The second resulted from a dispute between Tadhg Linnane and Brian Lenihan where the players pulled across each other with the ball nowhere near. There were yellows issued after the first incident, after the second the colour changed to red as both players were sent off. Galway prevailed by a single point, but will take little satisfaction from the victory. 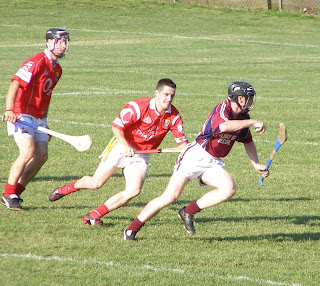 Galway looked comfortable for most of the first half. Former Dublin U-21, Shane Murphy, was on target with most of his frees. There were also well taken points from Danny Fitzpatrick, John Moylan, and Richie O’Connell. Cork managed scores from Mike Noonan, a lovely point from left half forward Eric Hegarty, and two from Mike Allen. Leading by eight points to four, and not having looked to be under much threat at the back, Galway looked to be cruising to a comfortable win, but Cork had other ideas. Cork worked their way back into the game courtesy of a goal from Hegarty. Allen and Hegarty added a point each, to one score from Murphy to make it Galway 0- 10 and Cork 1-6 at the break.

Cork opened the second half with three scores in a row, two Allen frees and point from midfielder Mike Noonan. Behind by two points, Galway started to work their way back into the game. Murphy put three frees over the bar and then John Moylan got on the end of a ball over the top and netted to put Galway four points to the good. With 20 minutes left it was all to play for. Cork got back within a point and then all hell broke loose and the game threatened to get out of control. Eventually, after lengthy stoppages, the referee got the players minds back on the game for long enough to see out the 60 minutes. Eric Hegarty and Brendan Barry traded frees for Galway to come out with the win.