Galway led from start to finish and survived a sending off late in the second half as Cork threatened to make a comeback. The result leaves Cork as the only team yet to win a game, and with three games still to play, Galway have a chance of an intermediate playoff place. Galway displayed better passing into the forward line and their defence swarmed the Cork forwards. Cork simply did not have all of the parts necessary to win their first game of the year, and played well in spurts, but not consistently enough to threaten their opponents. Galway had more options up front and the corner forward duo of Adrian Kelly and Brian Hanlon kept the Cork corner backs chasing all afternoon. 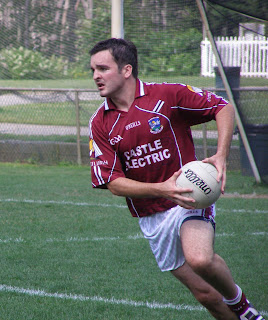 Galway's Paul Cummins Comes out of Defence.
Galway got off to a six point lead before Cork got a score up on the board. Brian Hanlon was busy in his corner forward position and was fouled for Adrian Kelly to put the first score of the game over the bar from a free. Hanlon then added a second and a third before Kelly put the fourth and the fifth point over the bar. Kelly and Hanlon maintained their duopoly on the scoring front for Galway before Cork got their first score of the game from Kieran Connolly. Galway’s passing was more coherent and the tribesmen defended in numbers when Cork had the ball. Cork always looked vulnerable at the back when Galway attacked. Hanlon added another score for Galway, and Peter Nolan and Greg Rogan rounded off an eleven point first half for Galway while the rebels mustered three. 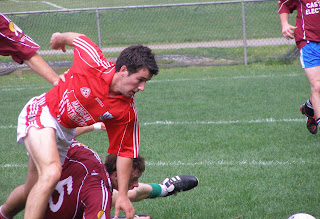 Wesley O'Brien and Kieran Lillis Tussle for the Ball.
Cork made a few changes early in the second half and made some noise. After Adrian Kelly pointed for Galway, Cork won a penalty when Robert O’Kane was fouled in the box. Kieran Connolly took it, but the shot was too measured and Brendan Doherty saved comfortably. Niall Coakley got Cork within five points with two kicks of the ball. Coakley pointed a free and then the Carraigaline man put away Cork’s second penalty of the day. Substitute Kevin McCarthy was fouled just inside the area, and Coakley placed a well hit shot into the bottom corner. The sides traded points as Galway maintained their five-point lead. Adrian Kelly stretched the lead to six when Galway’s Alan Glynn was sent to the line with 10 minutes to go. Coakely pointed twice from free kicks to bring Cork within four points and there was hope for the rebels. Galway however, got their act together for the run in to the final whistle. Hanlon pointed a free and Greg Rogan followed with a well taken point. Galway took a short free and the St. Michael’s clubman made the finish look all too simple. Hanlon rounded off the scoring with a free kick to get Galway off the mark in the standings.
Cork: R. Phelan, J. Leonard, C. Caffrey, K. Reid, A. Cahillane, D. Kerins, W. O’Brien, R. O’Kane, S. Keaney, K. Connolly (0-2), P. Healy (0-1), J. Monahan, N. Coakley (1-5). Galway: B. Doherty, S. Melia, A. Glynn, JJ O’Neill, K. Lillis, P. Cummins, S. Gallagher, G. Rogan (0-2), P. Howard, T. Walsh, P. Nolan (0-1), A. Kelly (0-8), B. Hanlon (0-7).
By Rory O'Donnell
Posted by Rory at 11:02 PM