This was a benign looking fixture. With Cork’s season not shaping up the way the rebel footballer’s at home is going, and the Tones setting themselves up for another playoff appearance, it took a surprisingly long time for matters to be effectively settled. Cork kept themselves in the game until the final five minutes of play thanks to a flurry of scores towards the end of the first half and some good displays in the back line in the second, which was helped by some ineptitude shown by the Tones until Steven Donaghy finally put the nail in the coffin with a goal five minutes from the end. A couple of injuries to Tadgh Healy and Robert O’Kane also did not help Cork’s cause. 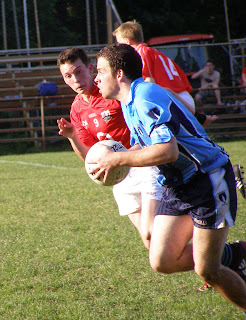 Wolfe Tones wing back Brian Maguire looks for a colleague.
A Wolfe Tones runaway would have expected, and after fifteen minutes of play it was looking as though that may be the case. Cork to their credit came back into the game and having trailed by five points, reduced the deficit to two at the half as they pushed hard for the last 10 minutes. Wolfe Tones looked sluggish, and perhaps a little complacent, but did not get any flow to their game. The South Boston side established an early lead. Points came from Sean McVeigh, Donaghy, Marty Farrell, Brian Maguire, and Gary Sayers. Cork looked to be in for a slow death. Not so. The southerners sprang to life in the last ten minutes of the half and the combined shooting of Kieran Connolly and Jared Monaghan pulled the rebels to within two points at half time. 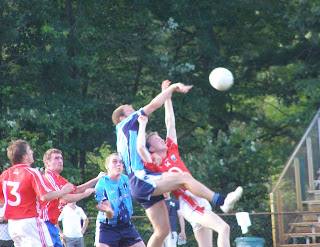 Sean McVeigh looks like he got the better of this kickout.
The second half was a story of missed chances and disjointed play for both sides, neither side showed much direction in their play – and some lengthy stoppages early on may have contributed as the Tones looked like they set out their stall to put their opponents away early. Cork showed some determination in the back line, Aaron Cahalane and Paul Healy dug in. Unfortunately Cork could not convert possession into scores. The ball was handed back to the Tones backs time and again. As time went by the writing was on the wall. Tones had some good goal chances, Dan McCabe came close twice, and eventually Stephen Donaghy got the goal that ensured the points for the Tones. Donaghy got on the end of one of the best moves of the game as he steamed through the middle to bury the ball from close range. The Tones added three more points to embellish the scoreline, but will surely be looking for a better display the next time out.