It must feel somehow unjust to score 15 times to 10 for your opponent and to still lose the game. Galway found themselves at the end of just such as result against an as yet to be beaten Donegal, who put in a second unconvincing performance in a row in spite of coming out on the winning end. Sometimes they say a sign of a good team is one the wins even after playing badly, whether this proves true in Donegal’s case remains to be seen.

Donegal built their victory on the back of four first half goals. After Galway got on the scorebard first through an Adrian Kelly point, Donegal goaled through the St. Eunan’s Letterkenny youngster, Ross Withery. Donal Redmond fired back with a point, and Kevin Curran and Eddie Mannion added two more for Donegal. A second goal came from a penalty after Peter Fahy was fouled in the area and Cormac Mullen made no mistake with his shot. It was all Donegal as Fahy and Mangan added to Donegal’s lead, while Kelly pulled a point back for Galway before half time to make it Donegal 4-4 and Galway 0-3. 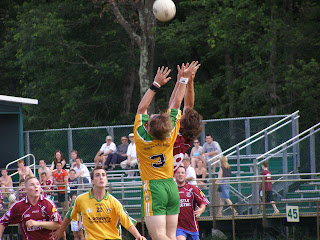 Donegal's Cahir Healy and Galway's Adrian Kelly contest a high ball.
Galway came back strong in the second half and if there was more time could have stolen the game. Donegal, it must be said, seemed happy to rest on their laurels, a habit not worth getting into. Galway fired on all cylinders to get back into the game and had the trusty boot of wing forward Pauric Howard to thank for some very good free taking. Galway were full of running as they proceeded to eat into the Donegal lead. After Eddie Mangan pointed for Donegal, Greg Rogan got the ball rolling in the other direction with a pointed free. Howard added three frees, and Kieran Lillis pointed as he powered through from center back. Mangan stemmed the Galway tide briefly with a point, but the tribesmen kept on coming, playing the ball well from their back line. Howard added another point, and with time the enemy Galway needed a goal. Donegal funneled back to protect the goal, and limited Galway to points. A couple of late Howard frees brought Galway back to within a goal, but the final whistle sounded too soon from a Galway perspective – and just about in time from Donegal’s.
Galway: B. Doherty, S. Gallagher, A.Glynn, J. Kehoe, K. Lillis, P. Cummins, T. Walsh, B. Glynn, P. Howard, G. Rogan, D. Redmond, A. Kelly, B. Hanlon. Donegal: F. Murphy, S. Lee, C. Healy, M. McGowan, S. Hannon, P. Fahy, D. McNulty, P. Kelly, R. Withery, C. Bell, K. Curran, E. Mangan, C. Mullen.