Hard times for Armagh-Notre Dame and Cork these days. The northerners prevailed in this bottom of the table clash that at times it seemed neither side was too interested in winning. For much of the first half it looked like it was Cork’s game to lose, only for Armagh-Notre Dame to storm into a 10 point lead in the second half, and almost give it up at the death as Cork came back within a score of salvaging a point. 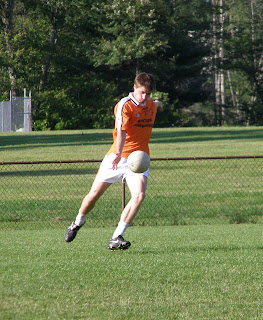 Darren Gilsenan pops one over for Armagh-Notre Dame.

Cork held a slight advantage at the end of the first period. The rebels looked the better side for the opening quarter and built up a five point lead, but Armagh-Notre Dame buckled down and played their way back into it as the half wore on. Jared Monahan was the main link in the middle of the field for Cork, and the former Derry under-21 also took the lead role in the scoring department. Monahan scored the first five points for Cork, and it was wing back Wesley O’Brien who brought some diversity to the scoreboard as the Cork forwards were not exactly firing on all cylinders. Niall Coakley was the only player named in the starting forward line to get on the scoresheet in the first half with a well taken goal, and followed with a point at the end of the half. Armagh-Notre Dame did not do much better with their front five. Darren Gilsenan and Niall Forde were the only forwards to put the ball between the posts in the first half. It was up to the midfielders and half backs to make inroads on the scoring front. Frank Meehan, Rory McClelland, Brian Boylan, and Gavin Gilsenan came running through from midfield and the half back line to put a dent in Cork’s lead. At the half Cork led by 1-8 to 0-9.

Armagh-Notre Dame came out all guns blazing in the second half, and could not have wished for a better start. Darren Maguire netted twice in quick succession. Aiden Blake provided the pass for the first goal, and the Fermanagh man’s second came from Cork’s failure to clear the ball properly. Maguire duly took advantage and slipped the ball past Eddie O’Driscoll in goal for Cork. Cork had their goal chances but misfired on one occasion and on the other Ciaran Molloy saved well. Darren Gilsenan made it three in the goals column for Armagh-Notre Dame and suddenly Cork were facing a 10-point mountain. Cork started a fight back in an effort to salvage something from the game, having introduced a raft of substitutes. Their opponents seemed happy to play their part in the drama by allowing their opposite numbers back into it. Coakley pointed twice on the trot, and Monahan provided a fitting finish to a lovely move to bring Cork within five points. Wesley O’Brien provided a goal with a sublime finish at the death to provide some hope of a last gasp reprieve for Cork, but the last chance high ball was cleared by the northerners. The season does not look to hold much promise for either side. That said, Cork have some quality footballers in Monahan, O’Brien and center back Tadhg Healy, while Rory McClelland and Damien Burke for Armagh-Notre Dame showed some steel when the chips were down.