McAnespies showed that they can learn from past experience, and along with some positional changes, brought an attitude to the game that was all business. Luke Sweetman started at midfield and Colm Donnelly at wing forward. Donnelly thrived with his newly found freedom on the wing in the first half, while the middle of the park might suit the skills of Sweetman more than the forward line where he had appeared in the past. In addition the back line was as tight as a fist and strangled the Donegal forwards, limiting some high caliber marksmen to a combined six points, two in the first half. Donegal have a pool of talent that is the envy of most clubs, but still are trying to find the right combination. Paddy Kelly did not start the game, and came in within 10 minutes as Donegal were struggling early on. From the get go McAnespies put a stranglehold on their opponents and while Donegal managed to find some breathing room here and there in the second half, the Tir Chonaill men could not break the grip of the North American champions. 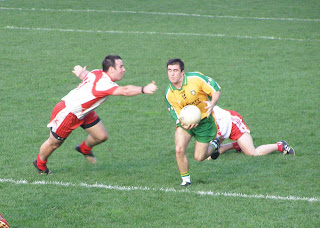 Donegal's Eddie Mangan evades the reach of Neil Donaghy.
McAnespies put four points over the bar before Kevin Curran opened Donegal’s account. Jamie Kelly, Alan Nestor, and Colm Donnelly (2) had McAnespies ahead after 15 minutes. Indicative of the task that Donegal faced was the immediate response to Donegal’s opening score. Donnelly finished a sweeping move from the ensuing kickout. Donegal also had Fergal Murphy to thank for two outstanding saves to keep the ball out of the net. Both were shots from Jamie Kelly. Murphy parried the first powerful shot one over the bar, and on the second occasion Kelly tried to sneak the ball past Murphy, but Murphy got a trailing foot to the ball. Cahir Healy also saved Donegal’s bacon on another occasion as he blocked a close range Colm McCrory shot. Healy’s battle with McCrory was one of the few that Donegal could claim as a victory. Healy did an outstanding job on the McAnespies dangerman, but the problem from a Donegal viewpoint was that there were others needing stopping. 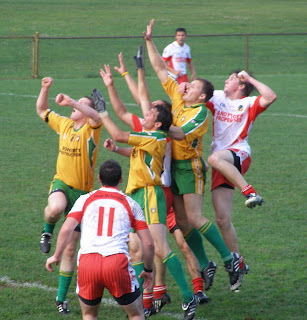 One up for the ball lads!
Sitting on a comfortable six point lead to start the second half, McAnespies had their work cut out to keep it. Donegal pushed harder on the door, but scores were in short supply and six points seemed double that. Eddie Mangan got a much needed point for Donegal the start the second period after three minutes, but McAnespies answered with a typically well worked score. Rory Maguire found Luke Sweetman, who served the ball to Mark McGovern on the overlap from wing back, and over the bar. Donegal lopped two points off the lead as the northerners started to win more possession and did a better job holding the McAnespies forwards in check. However, with the forwards quieter, each of the McAnespies half backs stepped up to point in the second half and maintain distance between the sides. Paddy Kelly put a fine individual effort over the bar and Michael McGinty reduced the lead to four points. McAnespies, however, answered in kind through Keith Hudson and McCrory. Donegal had to fight hard for every score, and Kelly put two more hard earned points over the bar. Time was a factor however, and Donegal did not have it on their side. David Wright saved well from substitute Robert Porter, and Donegal added another point from a Fergal Murphy 65. McAnespies continued to win and keep enough possession to maintain the advantage, and when given the chance slowed down the play. Neil McAdam put an insurance point over the bar with 26 minutes gone and by that stage a goal was needed for Donegal, and it looked unlikely that one would come. McAnespies kept the door shut and while enhancing their playoff position, ensured that Donegal’s chance of claiming top spot are lessened. The result leaves no team undefeated as Kerry put paid to Christopher’s unbeaten run in mid-week.