In a big game, where the opposing Gaels team needed the win to retain hopes of a senior championship, Christopher’s came up trumps and demonstrated that their unbeaten record is not an anomaly. Christopher’s had the benefit of an extra man for most of the game, but in fairness the Hyde Park men had started inflicting the damage well before Kieran Cox was shown a red card for a late high challenge on Eric Hegarty. The 12-man Gaels started to stage a comeback early in the second half, but star forward Mark Dougan and Christopher’s John Kavanagh were each sent off for their part in a schmozzle, and with the game reduced to 11 men versus 12, Christopher’s took full advantage and ran away with it in the final 15 minutes. 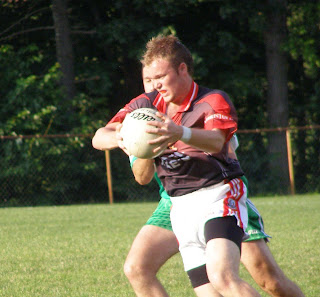 The Gaels struck first with two points in two minutes from corner forward Mark Dougan. Christopher’s sent a message as Eric Hegarty hit the side netting with their first chance. Brian Lonergan kick started things with a run from wing back to setup Hegarty for Christopher’s first score. From that point on the Christopher’s corner forwards caused havoc in the Gaels back line. Christopher’s won a healthy amount of possession and played some good ball into the corners. Hegarty and Nemo Rangers prodigy, Finbarr O’Driscoll, had the Gaels back line looking for answers. They took full advantage of the ball played in to them as Hegarty slotted two points over the bar and O’Driscoll three in the following 20 minutes. After Hegarty scored the sixth point in a row for Christopher’s, Cox’s marching orders came. The Gaels switched wing back Colm Arkinson on to O’Driscoll, and the Corkman was somewhat quieter. However, Ian Rowland at wing forward stepped up and pointed three times in the final stages of the half. The Gaels struggled to get the ball into Dougan and Michael Martin, and when the westerners did get into shooting range, the result was not what was wanted with the ball either going wide or dropping short. Eventually a goal came, and it was well worked. Michael McGill started a move that Michael Martin finished with a fine shot into the roof of the net to keep the Gaels in with a fair shout. There were four points between the sides at the half, 1-3 to 0-10. 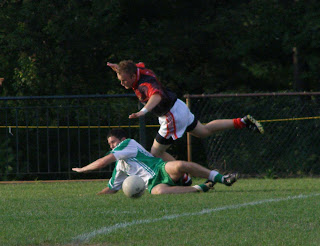 The Gaels got off the great start in the second half and evened things up within four minutes. Playing with a heightened sense of urgency, the Gaels were first to breaking ball in the middle of the field and chasing down any loose possession. Mark Dougan won a penalty and Galwayman Michael Martin executed the kick perfectly and made it a one-point game. The Antrim native then scored a superb point under pressure to level the scores with four minutes gone. However, things went all pear shaped from a Gaels viewpoint as one minute later Dougan became the second Gaels man to get his marching orders, along with Christopher’s corner back John Kavanagh, for their part in a free for all. Christopher’s went two points ahead thanks to Rowland frees, but the Gaels came back again. Colin Flanagan and Michael Martin (2) put three unanswered points over the bar as the westerners again raised their game. One wondered how long could the Gaels keep up the tempo. With 15 minutes left it was all to play for, but Christopher’s inched their way into the lead again as they started to regain midfield dominance. Sean Kelly pointed three times in three minutes and Rowland added a free to put Christopher’s four points ahead. The Gaels continued to press for some scores, however with the backs caught upfield, a goal came that killed off the game with seven minutes to go. O’Driscoll got on the end of a breakaway move and netted with aplomb to put Christopher’s seven points ahead. Christopher’s went on to add another 1-6 before the final whistle and are sitting nicely on 10 points – and still to be beaten. The Gaels may still have a chance, but that could depend on other results.