Saturday evenings throw up some of the best games of the year. With Kerry leading by 8 points and only 7 minutes away from pulling off an upset, Donegal’s Paddy Kelly fisted the ball over the goal line from close range. According to the umpires it was too close as both signaled for a square ball, but the call is not the umpires to make. Referee, Brian Gallagher adjudged the goal to be fair and it stood. Kerry were still leading by 5 points, but with their confidence now shaken and Donegal seeing a pathway to redemption having played so poorly for 50 minutes, the momentum took a massive swing. Donegal went on the score another goal and four points to steal the points from a Kerry side who wilted having worked very hard for 50 minutes. 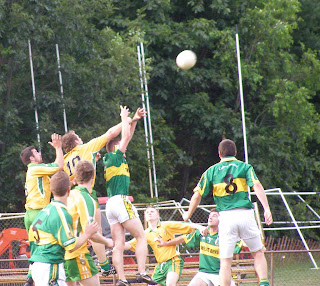 Paddy Kelly gets his fist to this ball in the first half.

Kerry were clearly up for this game, their concentration and determination was evident in the team’s play all through the field. On the other hand, Donegal looked as if they were sleepwalking for most of the first 30 minutes. Kerry’s back line worked extremely hard in closing down the space for the Donegal forwards and the ball played ball into the forward line was very good. Mark McGowan opened the scoring for Donegal with a fisted point, and Kerry answered with two. Sean Kiley, who impressed at center forward, and Rory O’Neill at corner forward got their names on the scoreboard. After Eddie Mangan leveled affairs with a well-taken score after 10 minutes, Kerry worked themselves into a four point lead at the break. Winning possession from kickouts and breaking up Donegal moves, Kerry put five over the bar to one for Donegal for the remainder of the half. Donegal also had Ferghal Murphy to thank for two fine saves that prevented Kerry for scoring a goal. The first was a shot from Rory O’Neill, and Kerry were unlucky as Barry Kennedy was first to the rebound but his follow up hit the crossbar. Robbie Croft was denied late in the half as Murphy got down well to stop the Naomh Barrog clubman’s shot from the edge of the small square. 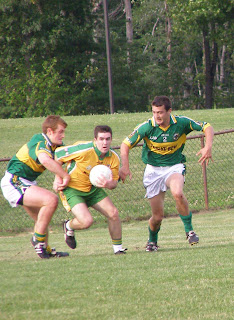 After the restart Kerry continued to play with confidence and got the first score of the second half. Donegal looked as if they were trying to raise their game, but Kerry continued to put in the effort to maintain the lead. Rory O’Neill put a well worked score over the bar. Mark McGowan and Paddy Kelly pointed for Donegal, but Kiley split the posts twice for Kerry in response. After Mangan pointed from a free to bring Donegal within four points, that goal that seemed like it was coming all afternoon for Kerry finally arrived. Rory O’Neill netted from close rage following a move involving substitute George O’Keefe and the instrumental Kiley. After the sides traded points with Kerry eight points ahead, Donegal scored the controversial goal. Kerry still held a comfortable lead, but what followed was a complete reversal. Donegal undid in less than 10 minutes a lead that took Kerry 50 to build. Mangan played a big part in the comeback, and pointed to follow up the goal. Donegal now were the ones winning the kickouts and breaking up the Kerry efforts at moving downfield. Substitute Christy Bell blasted home a second Donegal goal with the clock winding down, and Mangan fisted the equalizer over the bar a minute later. Mangan then put a 35 yard free over the bar, and won the ensuing kickout to supply Paddy Kelly the ball for the insurance point.

A cruel ending for Kerry, but a lesson learned perhaps. Kerry showed that they are capable of playing some high quality football. A good sign for Donegal, when the chance for redemption came the northerners grasped it with both hands.


There were two other senior football games played Saturday. The Wolfe Tones easily beat Armagh-Notre Dame, while Christopher's continued their unbeaten streak with a five point win over Galway, 3-11 to 1-12. In junior football the New England Celtics are still looking for their first win, Cork came out winners by a score of 1-11 to 0-9.