Aiden McAnespies senior footballers tasted defeat for the first time in over a year at the hands of a determined and spirited Shannon Blues team. Once the Blues had the smell of victory in their nostrils, they kept working until the job was done. The Blues trailed for the first 40 minutes, but went ahead early in the second half with a well taken Colm McGee goal. The Blues then dug in until the very end and stifled McAnespies’ efforts at maintaining their unbeaten record. 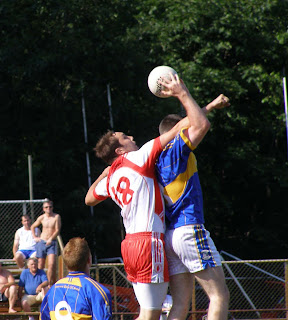 Philip Lydon gets his hands on the ball as Neil Donaghy challenges.

Playing with a slight breeze, McAnespies took advantage and established a three point lead after 30 minutes of play. David O’Callaghan opened the scoring for the Blues. After that McAnespies went on a five points to one scoring spree. Colm McCrory and Alan Nestor shared the spoils. Usually taking the field at wing forward, McCrory lined out at corner forward to start the game, perhaps in hindsight for the northerners, McCrory’s trademark speed could have been better utilized on the wing. It seemed as though we were in for another routine win from the South Boston boys. However, in spite of playing second fiddle on the scoreboard, had The Blues taken their chances it would have been closer at the half. There were at least three good opportunities that went amiss. Eventually Phillip Lydon found the mark and Colm McGee displayed a flash of brilliance that was a harbinger of what was to come in the second half. The man from Tubbercurry scored a rousing point to lift the Blues at the end the half and made it a three point game. 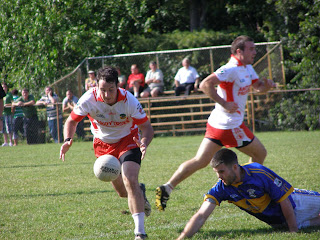 Colm Donnelly chases down the ball for McAnespies

The Blues got off to the start they wanted in the second period with a point from a Lydon free kick. Jamie Kelly and Colm McCrory put McAnespies back into a four point lead with a point each. Then the Blues hit with a goal five minutes into the second half. Again, it was the Tubbercurry man, Colm McGee, who roused the Blues contingent with a fantastic goal. McGee ran on to ball played through the middle and tapped it past the advancing keeper, then placed the ball exquisitely into the corner of the empty net from a tight angle. Philip Lydon then leveled the scores with another pointed free kick. Frustration began to creep into McAnespies play, and bookings were issued to Neil Donaghy and also to Philip Lydon for the Blues. Again, McGee got them cheering in the stand on the Blues side of the field with another fine score to put the Blues in the lead two thirds of the way through the half.

With time running down McAnespies started to lose their way with some wayward shooting and aimless kicking into the forward line. Fouling the ball when in possession on several occasions, and with some poor shooting, the frustration grew for the defending Boston and North American champions. The Blues could smell that a famous victory would be at hand and dug in at the back. Philip Lydon added to the Blues lead with 13 minutes still left to play. As McAnespies continued in vain to claw themselves back into the lead, the Blues put up a solid wall at the back to keep their opponents out. With a minute to go McCrory brought McAnespies within a point and set up a tense finale to the game. McAnespies pressed for the equalizing score, but Lydon put the insurance point over the bar in injury time and the Blues celebrated a fine win. The result opens things up at the top of the table as now Donegal and Christopher’s are the only teams yet to be beaten.