Having played second fiddle to Wexford for the last 3 years, Tipperary looked eager to turn the corner in an intensely fought game of hurling. While the field had dried out significantly, surface conditions were still heavy and the sides labored to produce any kind of crisp quality to their performances. Referee Shane Sinnott issued three yellow cards and a red in the first half, but the game was still marked by some bouts of fisticuffs and heavy challenges that sparked unsavoury reactions. After losing Andy McRedmond to a sending off in the first half, Tipp were always playing from behind, and Wexford’s dominance continued as they seemed to have more weapons in the scoring department. 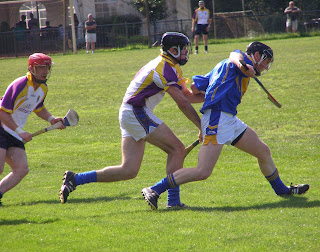 Tipp corner back James Heffernan tries to escape the attention of Wexford's Tom Moloney.
Tipp opened the game brightly. Tipp center back David Young struck a fine free from range and Pat Howard followed with a second soon afterwards. Referee, Shane Sinnott, was called to action early and issued yellow cards to Young and Wexford’s Ryan Dwyer following a schmozzle after Dwyer felt that Young unfairly impeded him when going for the ball. Wexford’s first score of the game, a Ryan Dwyer scrambled goal, put Wexford into a one-point lead. Pat Howard leveled matters with a free after Tipperary lost Andy McRedmond to a straight red card – Dominic McGill received a yellow for his part in the episode. Wexford used the extra man well in the full back line, and Tipp’s lobs into the Wexford full back line were promptly returned. Eoin Ryan stood out at wing back for Tipp as they ceded the initiative to their opponents. Tony Murphy pointed back to back frees to put Wexford into a lead that they did not relinquish. Stephen White and Ryan Dwyer added to the lead before Tipperary scored again. After Howard and Dwyer traded points, Wexford’s second goal came from the stick of Ger Griffey. Griffey took a free on his own 21, and the ball carried all the way to sneak under the crossbar of Jim Howard who also had the sun to contend with. A fortunate score at a great time for Wexford, quite the opposite for Tipp. At the half things looked good for Wexford; a seven point lead on the scoreboard, and a man advantage on the field. 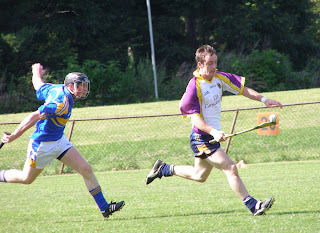 Tony Murphy has goal on his mind as he runs through the Tipp back line.
Things got interesting in the second half as 12-man Tipp mounted a valiant fight-back. Tipp raised the intensity at the back and Wexford did not look so comfortable. Two Tipp goals brought them right back into the game. Brian Lonergan netted five minutes after the restart, and after 16 minutes Pat Howard had Tipperary within 2 points of their opponents. Howard got on the end of a dropping ball into the box and tapped the ball into the past Griffey into the Wexford net. Truth be told, David Young was a fortunate man to remain on the field following a bad challenge from behind that could easily have resulted in a second yellow, and later escaped following his reaction to being penalized for a free. Tipperary introduced Shane Menton who took over the free taking duties. The first three efforts sailed over the bar as Tipp cut into Wexford’s lead. Stephen White was also accurate from the placed ball in his free-taking duties for Wexford, and along with Tony Murphy, kept Wexford a score or two in front. With 2 minutes to go Tipp were within a goal of evening things up, but Murphy made it safe for the Slaneysiders with a well taken point. With Tipp needing 2 scores, Menton decided to take the easy score with a close range free, and Tipp pressed for the equalizing goal. Wexford put bodies in the box, and held out to reaffirm their status as the team to beat in Boston.