Finally the rainy weather yielded to some sun and light breeze to create reasonably good conditions for a game of hurling. The grass was cut and the playing surface was the better than it has been all year. Wexford went into a comfortable lead in the first half and in spite of two late goals from Tom’s, the Slaneysiders always looked as though they would claim the spoils. Tidy play at the back and a forward line that spread the scoring around laid the groundwork for a comprehensive victory for the Wexfordmen to put them top of the table. 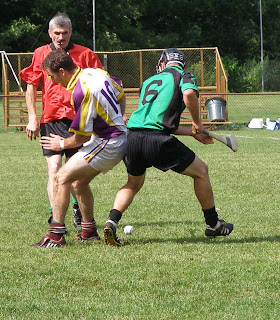 Wexford's Peter Ryan and Fr. Tom's Donal Moore tussle for posession.
The first half was a rather lackluster affair, underlined by the statistic that neither side scored from play until Tom Moloney put the ball over the bar with two minutes left in the first half. The highlights were a missed opportunity at goal for each side. First Tom’s corner forward Gerard Hennelly had a crack that just missed, and later in the half Wexford it was a great save by Tom’s keeper Aaron Bandon that kept Wexford from hitting the back of the net. Ryan O’Dwyer Stephen White and Tony Murphy shared the free-taking duties for Wexford, while for Tom’s it was Maurice Callnan. Callnan pointed from the dead ball four times for Tom’s, one a 70 late in the first half. Wexford’s free takers shared the spoils with two points each. Wexford played some tidy hurling out of their back line and O’Dwyer caused problems for Tom’s with his speed and quickness on the turn. As the game wore on the scores seemed to come easier for Wexford. After Maloney pointed from play it seemed to have the effect of signaling to his cohorts to do likewise, and O’Dwyer and White each followed. At the half Wexford were sitting on a comfortable looking five-point cushion. 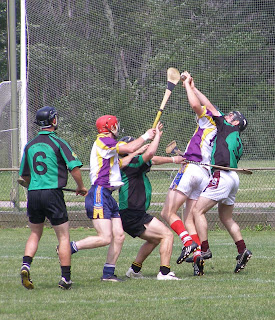 Wexford's Tony Murphy grabs the ball in a crowd.
The Tempo of the game increased in the second half as Tom’s tried to get themselves back into the game. The sides matched each other for scores in the opening minutes. After Tony Murphy pointed for Wexford, Tom’s put two scores together for the first time in the game from Trevor Kelly and Callnan. Sean Herlihy and White then made it double scores as their points put Wexford into a twelve points to six lead. Tom’s introduced Fran Keenan and Michael Magill into the forward line in an effort to generate some return in that area of the field, and shortly thereafter Eanna Murphy. Wexford continued to hassle and harry at the back and Tom’s continued to struggle to improve matters in the scoring department. Their efforts finally bore fruit when a goal came from Murphy, with Michael Magill doing the set up work. Wexford added two more points from Tony Murphy when Tom’s struck with a second goal at the death. Trevor Kelly dropped a high ball into the crowded box, and it found it’s way into the back of the net. Any Tom’s hopes of a late comeback were dashed as it was a little too late and the final whistle sounded shortly thereafter.