The Connemara Gaels extended their season with an emphatic win over Kerry in the intermediate semi-final. The Gaels were helped by the sending off of Phillip Corrigan mid way through the second half. At that stage the westerners led by two goals, and in the latter stages of the game netted a glut of goals to ensure a place in the intermediate final, when they will face a resurgent Armagh-Notre Dame. 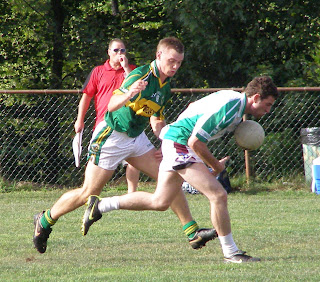 Colin Harkin looks like he got the better of Phillip Corrigan....

The Gaels got off to a flying start with two goals in the space of a minute. Mark Dougan was fouled in the box and converted the penalty himself. Dougan scored the second as the kickout was sent straight back in, and Gaels found themselves in an early six point lead. Kerry settled down and made inroads as the half wore on. Kerry notched up a goal and five points without reply from the Gaels until late in the half. Robbie Croft and Rory O’Neill were the marksmen for Kerry. After Croft converted three points and O’Neill one to bring Kerry within two, O’Neill made a mazy run through the defence and planted the ball into the roof of the net. O’Neill followed with a point and Kerry led by two. Not that Kerry dominated the play by any means, the Gaels were through on goal three times and each time came away scoreless, kicking two wides and a save from Brian Kelly kept the Connemara men at bay. Taking the points would have been the better option in hindsight. Michael Magill and Dougan each pointed before the half time whistle to level matters. 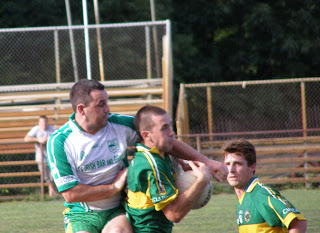 ...while Thomas Dennehy looks like he did against Aiden Flanagan.

The second half remained tight for the first 10 minutes, however, Kerry played the latter part of the half with a man down. Phillip Corrigan was shown a red card for striking off the ball. The Gaels isloated Dougan on the 14 and the ball played in paid dividends as Kerry were forced to try and hold the Antrim man, but with wide open space around him Dougan made the most of his opportunities. It was Kerry who had the early advantage, a John Cuddy goal put the kingdom two points to the good, but 12 minutes in Dougan got the Gaels back into the lead. The corner forward stole behind his marker and blasted home. Dougan followed the goal with a fine point 2 minutes later, and from the kickout Michael Magill put away the Gaels fourth goal to put the Gaels six points ahead. A penalty converted by Robbie Croft gave Kerry brief hope, but Magill and Dougan made sure of the result with a goal each in the final 5 minutes. An intriguing final awaits next Saturday.

The Connemara Gaels would like to extend their condolences to Kieran Cox, and his family, who lost his sister Cathy in a car accident recently.
Posted by Rory at 12:16 AM