Wexford earned the chance to defend the Boston championship that they hold with a blistering display of scoring in the second half. Stephen White helped himself to a tally of eight points in the second period, both from frees and play. Coming off Tuesday night’s last minute playoff win over Fr. Tom’s, Galway had gotten off to a great start and at one stage led by six points. Wexford drew their opponents to within one point by half time, and took off in the second half as the defence shut down Galway’s forward line, and White and Tony Murphy leading the way on the scoresheet. 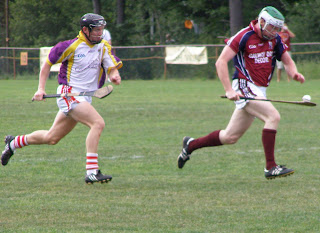 Greg Lyons is pursued by Stephen White as he bears down on goal.
Imor Creaven opened Galway’s account with a goal in the third minute. White and John Moylan traded points, and Wexford put two points together from Sean Herlihey and White. John Byrne netted a second goal for Galway with Moylan the provider. With the Galway midfielders, Sean Kelly and Greg Lyons, doing well, the tribesmen stretched the lead to six points. Richie O’Connell got on the scoresheet, and Creaven and Moylan added a point each. Wexford, however, showed that were just getting warmed up having had a long layoff since their previous game. Sean Herlihey made a run from wing forward and fired the ball into the back of the net to cut Galway’s lead in half. Brian Dalton and White then each pointed to reduce the Galway lead to a point heading into the second half. 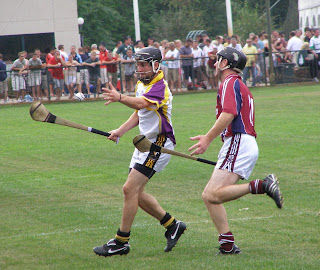 John Byrne moves in to challenge Brian Dalton.
Wexford opened the second half with six points to none for Galway. White accounted for 5 of them, making Galway pay for indiscretions no matter how far away from goal. Tony Murphy accounted for the sixth. Galway’s first scoring chance came in the 10th minute in the form of a 21 yard free that Moylan chose to hit low for goal, and the shot was saved. John Byrne pointed in the 11th minute, a badly needed score for Galway, and Moylan brought Galway within four points soon afterwards. With Galway struggling to get themselves back into contention Wexford eased away, scoring a goal and six points in the final 15 minutes, to a single point for Galway. The Wexford defence held dangerman Moylan, while White motored in the middle of the field and Tony Murphy caused havoc when the ball came within his reach. Murphy accounted for the goal, selling a lovely dummy to shoot into the empty net. Wexford and Tipperary again in next week’s final, and with the sides taking one game each during the season it is all to play for.