Aiden McAnespies pulled away from the Wolfe Tones in the second half to secure a berth against rivals Donegal in the junior football final next week. The sides were all square at half time, but an early second half goal put McAnespies into the drivers seat, and a good all around display saw off their fellow South Bostonians.

The teams went in at the break all square at four points each. Nigel Regan, Kieran Leonard and Mike Allen pointed for McAnespies, while the Tones matched their opponents for the first 30 minutes. Mike Allen netted an early goal and also knocked the Tones out of their stride. Allen slotted home from close range with a well taken finish. 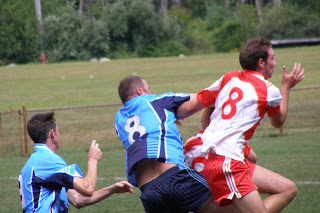 Brendan Murray tangles with Colin Clarke as Alo McGeough looks on.
Peadar Nugent added two points to the lead within the same minute, and less than 5 minutes into the second half the Tones found themselves 5 points in arrears. Marty McGeough and Mick Sammon each pointed from frees for the Wolfe Tones, but these were quickly erased by scores from Stephen McGettigan and Nugent. With 10 minutes remaining the Tones needed a goal, but Niall Duffy saved well and some valiant defending from Daithi O’Mahoney kept the Tones from coming back. Nigel Regan pointed twice and Leonard once as the Tones crept farther forward and left gaps at the back. Mick Sammon and McGeough picked off a point each from frees with 5minutes remaining, but with five points between the teams a goal was required. Allen made sure that even that would not be enough with two well taken points in the last minute as the Wolfe Tones find themselves playing second fiddle to their local rivals once again. 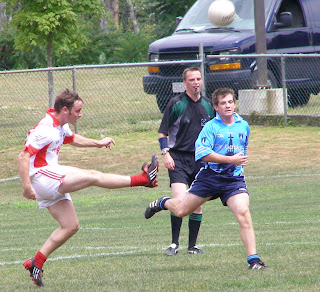