A second half bombardment from the South Boston side ensured that McAnespies avoid a playoff and make it into the senior championship playoffs next weekend. Kerry had their opponents on the ropes by the time the first half had ended. Trailing by two points and with Kerry looking like they were well able for the challenge, McAnespies looked like they were in trouble. The northerners came roaring back in the second half, and four goals put the Kerry challenge to rest. 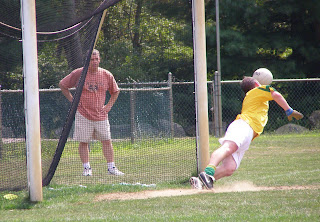 Brian Kelly saved a Colm McCrory penalty late in the first half.
Kerry led by two points at the end of the first period thanks to a good display of football. The sides traded wides to open the game, and McAnespies almost had the ball in the net but Jamie Kelly, who only had the keeper to beat, snatched at his shot and the ball trundled wide. McAnespies enjoyed most of the possession and Kerry did not mount anything resembling an attack for the first 10 minutes of the game. It was Kerry though, who opened a two point lead with their first two attacks. Robbie Croft pointed a free and Conor O’Sullivan stole forward from wing back to score a well earned point. Kerry maintained the distance for the remainder of the half as they raised the tempo. Frankie Sullivan worked hard in the half back line, while Thomas Dennehy and Phillip Corrigan were on top in the midfield battle. Mike Godly, Croft, and Dennehy pointed for the green and gold. McAnespies pointed through Jamie Kelly, Colm Donnelly, and Dermot McCrudden. McAnespies had a chance towards the end of the half to move into the lead. Colm McCrory was fouled in the penalty area, however, Brian Kelly dived to his left and put the ball around the post for a ’45. Dermot McCrudden mopped up to point just before the half time whistle to make it 0-6 to 0-4 in Kerry’s favour at the break. 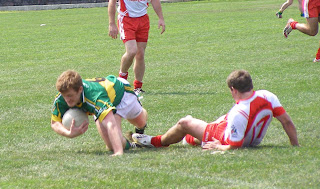 Frankie Sullivan battled hard for Kerry in the first half.
The second half was not so close. McAnespies made their intentions clear with an early goal to take the lead. After Colm McCrory reduced the deficit to a point, Neil McAdam broke forward from midfield, and after a give and go with McCrudden, tipped the return pass over the advancing keeper’s head and into the net Kerry replied with a point from a Robbie Croft free, but that was it from the Kingdom from a scoring perspective until the almost the end of the game. McAnespies were now winning the kickouts, and the back line stepped up to force Kerry into coughing up the ball on several occasions. 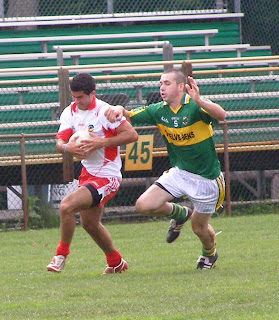 Neil McAdam led the charge for McAnespies in the second half.
Alan Nestor was introduced to the fray, and McAnespies lifted their game. McAdam added another point, and McAnespies second goal followed. This time Kelly made no mistake as his low, hard shot ended up in the back of the net. Colm Donnelly and McAdam extended the lead to seven points with a couple of well taken scores. Hopes of a Kerry comeback were put to rest after McCrory stole behind his marker and side stepped the keeper to fire home McAnespies’ third goal. Kelly made it four with 10 minutes to go. After Donaghy pointed substitute Donal Bowe scored a consolation goal for Kerry.