Tom’s had to win this game to keep their interest in the senior hurling championship, and win it they did with a fine performance full of heart and determination. In spite of having plenty of opportunities late in the game to decide that they had given it their best and it was not to be, Tom’s refused to die. Having led early, Tom’s led the lead slip and late in the second half looked dead and buried after Conor Kavanagh put the Tipp into a one goal lead with minutes left. Tom’s wanted the win badly and the bloodied Fran Keenan and substitute Ger Henley combined with a goal and a point respectively to win the game and keep Tom’s in the championship. 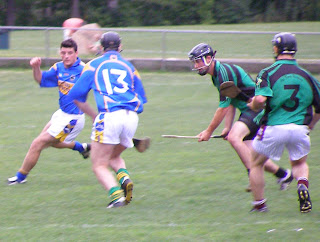 Tom’s came out of the blocks strong to keep their chances alive. Eanna Murphy latched on to a long clearance out of defence and in firing the ball past Jim Howard, kept his goal a game streak going. Shane Menton opened Tipp’s account with a pointed free, and the sides matched each other for scores over the following 10 minutes. Fran Keenan’s two points for Tom’s were answered with one a piece from Menton and James McCarthy. Tom’s were fired up and gave no quarter in their own territory. Donal Moore rediscovered some of his old form in the half back line, and Shane Staunton at corner back also stood out for Tom’s. With Tom’s on top, Trevor Kelly, Donal Moore, and Shane Howley each pointed and Tom’s led by five points mid way through the half. Tipp, however, began to get their act together. David Young and Eoin Ryan cut out a lot of ball played into the Tom’s forwards, and four points on the trot reduced the Tom’s lead to a point. Two came from placed balls taken by David Young, Menton and Conor Kavanagh accounted for the others. Tom’s needed a score to stem the Tipp flow, and it came from a Fran Keenan free. McCarthy answered for Tipp, but Keenan ensured that the half ended on a positive note for Tom’s with a massive free from his own 45. At the half it was Tom’s by two points, 1-7 to 0-8. 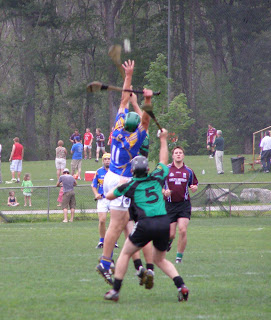 Tom’s opened the second half in the same manner as the first, hitting Tipp with a goal from the get go. This time it was wing forward Shane Howley who rattled the Tipp net, Howley took a well waited pass from Trevor Kelly and fired home. Fran Keenan followed with a free to put Tom’s two goals clear. Tipp are no pushovers however and the lead fizzled quickly. Tipp tallied a goal and three points in the space of ten minutes, with no answer from Tom’s. Tipp sent practically every puckout back with interest. Shane Menton pointed and Paul McGrath netted a 21 yard free. James McCarthy put two frees over, and with the sides now level all that Tom’s had worked hard for had disappeared. Fran Keenan put Tom’s back in front only to be cancelled out by a Pat Howard point. Aaron Bendon made a great stop to deny Tipp a goal and the game hung in the balance, but Tipp looked the likely winners. After McCarthy and Donal Moore traded scores, a goal came for Tipp. A dropping ball on the edge of the small square was sent into the net by Conor Kavanagh who chose to use the hurley while Paul Callinan was looking to catch – hurley beats hand every time. With a few minutes on the clock Tom’s still had a chance to come back, and they took it. Fran Keenan, who had left the field for treatment to a head injury earlier in the second half, ran 15 yards before burying the ball and the sides were level again. A draw would not do for Tom’s though. The chance to win the game opened up for substitute Ger Henley, and Henley took the point without hesitation. Tom’s ahead by a point now. Tipp still could have equalized, but some do or die defending saw Tom’s holdout until the final whistle.