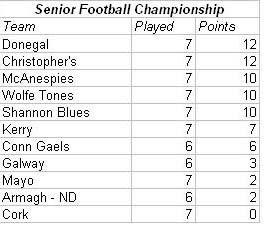 There was some controversy at the end of the Kerry v Galway game as Kerry had nudged themselves into a 0-13 to 0-12 lead late in the game. With Galway leading by two points, Robbie Croft put three frees from off the ground over the bar. Trailing by a point, Galway were attacking with the last possession of the game and the referee awarded a free in for what seemed to be a fair shoulder by a Kerry defender, and Greg Rogan chipped the ball over for the leveling score with the final kick of the game.

Needless to say, that ended Kerry's outside shot at a playoff since the Kingdom can only finish with 9 points and a minimun of 10 is needed to have any chance. In fact, there could be playoffs with 4 teams on 12 points if the Blues, McAnespies, and Wolfe Tones all win their final games. Donegal are the only side that would avoid a playoff for sure if they beat Cork in their final game.

In senior hurling it looks like Tipp and Wexford are the most likely finalists, but Galway and Tom's could produce a surprise. Cork are out of it with their loss to Galway.
Posted by Rory at 11:52 PM