Fr. Tom’s forced a playoff against the same opposition next Tuesday night by beating Galway. After a first half where the sides largely matched each other on the balance of play, Tom’s powered into a 10 point lead with 15 minutes to go. Galway had no answer as John Moylan and Declan O’Dwyer were well shackled by the Tom's back line, and the game finished with Tom’s deserving winners. 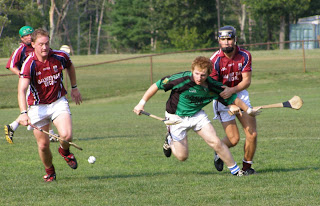 Tom’s led by three points at the end of the first period. Galway will rue three great goal chances that fell to John Moylan. Moylan fired the first across the face of goal and wide as he was clean through after 10 minutes, and soon after drilled a penalty that he won himself a foot or two over the crossbar. Later in the half Aaron Bendon pulled off a fine save to deny Moylan for a third time, and Galway had to settle for a ’65, which ended up wide. Tom’s had the edge on their opponents otherwise. Maurice Callinan (2) and John Cuddy put Tom’s into a three point lead before Galway scored their opener. After 11 minutes Declan O’Dwyer got the tribesmen off the mark with a point from play. Tom’s were on top in the back line, as Galway’s scoring options appeared to be more limited. The sides swapped points for the rest of the half. John Byrne and Sean Kelly found the mark for Galway, while for Tom’s Trevor Kelly, Fran Keenan, and Cahir Healy pointed. At the half it was 0-5 t0 0-8 in Tom’s favour. 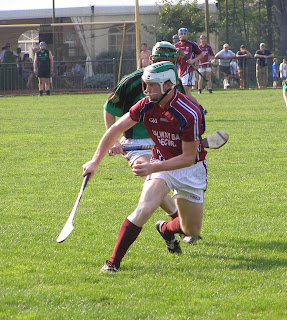 Greg Daniels tries to pull Galway back into the game.

Tom’s pulled away mid-way through the second half. Galway had got within 2 points, Jomar Creavin and Moylan (2) pointed three times between them, and Shane Howley and Callinan pointed for Tom’s. A close finish looked on the cards with 15 minutes left, but looks can be deceiving. Within a minute of each other Trevor Kelly and Howley had the ball in the net for Tom’s. Kelly won the ball on the 21 and turned his man to hit a one-hopper past the keeper. Less then a minute later Howley was first to a rebound off the crossbar from an Eanna Murphy shot. Cahir Healy and substitute Ger Henley each pointed to propel Tom’s into a 10 point lead. Tom’s continued to largely control proceedings Galway got the points back through Peter Buckredge and Tadhg Linnane, and a consolation goal from Moylan came at the death, but did not have the firepower to overturn the Tom’s lead. A playoff looms next Tuesday night, and on the basis of previous meetings between these teams one would have to favour Tom’s to be the ones togged out next Sunday.