Cork and Donegal are both playoff bound in the Junior A championship, but on the basis of this display Donegal look far the more likely contenders for the title. Donegal outplayed Cork for most of the game. Once David Bell netted in the first quarter the outcome of the game looked inevitable as Cork struggled to string together more than two or three passes. Eddie O’Driscoll did well in the forward line for Cork, but the back line struggled to weather almost constant pressure from Donegal. 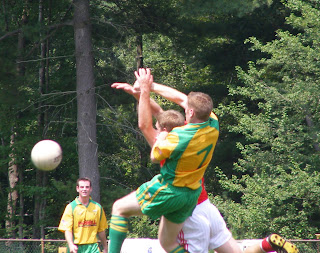 Jonathan Byrne and Mike Moynihan challenge for the ball.

The sides matched each other in the points column in the early going, but after 15 minutes Donegal’s superiority in possession was translated to the scoreboard. David Bell netted and established some daylight between the teams. Donegal continued to enjoy the lions share of possession, however, did not make it count on the scoreboard. Had Donegal’s shooting been more accurate, there would have been far more between the teams. Cork did themselves no favours and were far too careless when coming out of defence and lost possession frequently as a result. John Deery and Bell added points before half time to make it a 1-5 to 0-2 Donegal lead at the break. 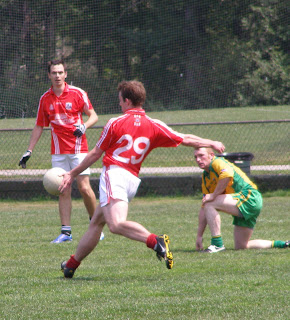 David Sheehan shoots as Cork try to make their way back into the game.

Donegal made sure of the victory before the second half was 15 minutes old. Bell and Eddie O’Driscoll traded points before the Buncrana man netted his second goal, and Deery put a second away to put Donegal in a commanding 14 point lead. Eddie O’Driscoll pulled back a consolation goal for Cork with 10 minutes to go, but the rebels never looked like having a chance of getting anything out of the game. Donegal brought on several subs for the last few minutes and Brian Boyce capped of a good overall Donegal display with the last point of the game.