Tir na nOg retained the Ladies Senior Football title with little difficulty as they overpowered a Roscommon side that battled hard but were not a match for their opponents. Tir na nOg faced little opposition all year, and as overwhelming favourites delivered the goods in emphatic fashion. In fairness to Roscommon, there was doubt as to whether the club would field a team at the start of the year, so it was a victory of sorts to be there for the final game of the season. 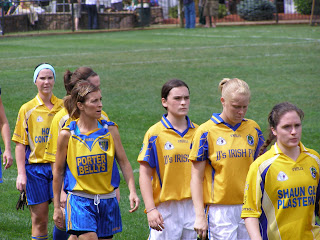 Roscommon parade behind the Artane Band before the game.

Roscommon opened the scoring with a Fiona Rochford free, but Tir na nOg responded with a goal and promptly went into overdrive. The Brighton side’s interpassing and running off the ball was impressive. Midfielder Claire O’Loughlin proved to be a valuable link to the forward line. The full forward line had all scored in the first 15minutes, and with Roscommon struggling to move the ball into opposition territory the writing was on the wall early on. Arlene Maguire goaled after 6 minutes, and Amanda Brosnan added a point after a lovely move. After Emma Conlon pointed from midfield, goal number two came from Calire Hehir after a breakaway move. The scores continued to flow and on the stroke of half time the third major was put away by Maguire. Niamh Daly,Aisling O’Gorman, and Niamh O’Neill played well on the half back line for the Brighton ladies. At the half the Tir na nOg lead was inassailable. 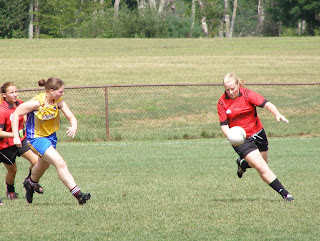 Aisling O'Gorman comes out of defence with the ball for Tir na nOg.

With Roscommon trailing heavily at the break the second half was a formality of playing out the time. A consolation goal from Rochford came in the second half, and Aoife Waters, Liz McVeigh and Nicola Sweeney battled to the end for Roscommon, while Tir na nOg advance to the North American Finals in search of their first County Championship.